That's a self portrait of this artist. Artist Tom Friedman was a big hit seven years ago. Back then he was an up-and-coming name in the art world.

Since 1995, Friedman has done well in Europe -- he's has solo shows in London and also in Los Angeles, but in terms of sheer on-the-scene oomph, headlines, raves, he's faded into the sidelines. Maybe his art is too subtle? The big names in art right now, like Jeff Koons and Damien Hirst, create rather outlandish, shocking works.

I know the story well. You want to be famous, BE somebody. You toss the ball. It rolls. You're noticed. You get reviewed. Your picture is in the newspaper and magazines. People buy tickets, or buy your book, or visit the gallery that's showing your art. But the first big break needs to be followed by the next, and the next

Well, Tom Friedman is back. He's at the well-respected Luhring Augustine Gallery, in New York City, getting noticed again by critics.

His latest self-portrait seems to captures a moment in his career that's like the self- portrait Rembrandt did when he was bankrupt and exhausted, and also like van Gogh's portrait of himself when he was ear-less and very unfocused.

Just recently , Robert Storr, head of Yale’s art school, but formerly curator of Friedman’s highly touted exhibition at MOMA, in 1995, said: “Tom’s a very good artist, and I look forward to seeing him come back into view, but it will take a body of work that will snap people's heads around again."

The red painting, at the top of this page, is currently on display in NYC. It's Tom Friedman's portrait of himself as a suicidal jumper who has just hit the ground. It's made entirel

y from cut and folded paper. (I like it a lot.) Also on display, this eight-foot-tall statue of him peeing, modeled from crumpled turkey-roasting pans. (I am not overly impressed by it.)

I found right words about him in a review in 2009 by Suzanne Menghraj, which mentioned a self-portrait he carved from one aspirin, and his Play-doh sculpture -- hundreds of items made out of Play-doh that Friedman arranged in a circle 183 centimeters in diameter; also all the words in the English language as of 1995, written on a 91.5 centimeter squared sheet of paper. (My husband, John Cullum, asked, "All the words from what dictionary -- he wrote all of them out?" I researched this, but can't find the answer.)

Anyhow, Suzanne M. said, "Friedman’s miniatures gave me the experience of being transported not so much by the look of what I saw — the degrees of likeness, the shapes, the colors, the handwriting — as by its limitlessness, the infinite in the infinitesimal."

That resounds in my mind, and helps me make sense of other Friedman works.

I think a comeback is going to be tricky for Tom Friedman. I know the inner thoughts -- maybe you didn't roll the ball far enough seven years ago? -- what can you do that hasn't been done before, that isn't in museums nowadays? -- why are you thinking about fame? Don't think about success -- what you really feel like creating?

St. Augustine, in the "City of God," said: "The desire for fame tempts even noble minds."

Okay, you shut your ears, close down your mind, but fame/success thoughts invade. They must be stopped. You can't create and think about all that stuff.

Tom Friedman, you better glob onto these words by Lord Byron:
"What is fame? The advantage of being known by people of whom you yourself know nothing, and for whom you care as little."

Want to see more? Click: Various other works by Tom Friedman.
Posted by em's talkery at 4:00 AM 4 comments:

Aside from John Cullum, my husband, there's Cary Grant ... ah, what an actor. He could do everything.

Also, I very much like the two Richards -- Richard Burton and Richard Harris -- their looks and sound -- both had extraordinarily full range voices and exceptionally clear diction. When they were in a scene, no matter how noisy, angry, wild -- I'd get every word.

Both Richards drank too much, and both of them were womanizers.

Burton's brilliant mind and intuition were fascinating. Was my fascination with him because he 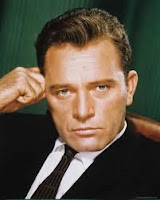 flirted outrageously with me? Yes. When I met him, he was already a famous movie actor and stage actor. I knew his wife, Sybil; I knew Elizabeth Taylor; I knew he was also sleeping with two chorus girls I'd met in dance classes -- both beautiful girls, who were rehearsing scenes with my husband in "Camelot."

It's complicated, being married to a great-looking leading man. The very things about the man that I love, that make me proud to be his wife, are the very things that attract the other women who work with him.

People in show biz -- performers, creators, directors, choreographers, as well as stage crew, have a childlike something within them -- a let's pretend spirit, a very strong -- what shall we call it -- that sexual predilection for one another?

They can't help it. Working on a show is a special magic time when you share the fun, and the fears --will the show be a hit, is it a good show? It creates wonderful rapport based on sharing a time of creativity where YOU are at your best. 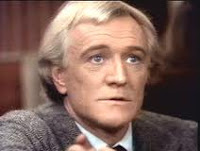 Richard Harris was handsomer, taller than Burton. Groupies congregated around him. What was it? He often was angry, raging, wild. He seemed to treat women casually -- didn't introduce them at parties -- it seemed as if there was a different girl at every party.

I can't help thinking that both Richards, with their huge passion for acting, affirmed themselves by seducing women. I think women sense that, and some women find that very attractive, dangerous, and sexually exciting.

That both these men drank excessively is not appealing to me, but maybe the drinking freed them, and enabled them to fall in love for a night, a week or so, with a partner. My husband drank a lot for quite a while -- until I demanded that he stop. His friend, and drinking buddy, George C. Scott, (with whom my husband had a great acting rapport), could not stop drinking, even after Scott was told it was killing him. And yes, Scott was also a womanizer. And yes, there was certainly a period in my husband's life where I worried about other women.

I'm tossing hits thought into the air -- maybe part of the indefinable something that makes a man a leading man, is his sexuality. Does the shoe fit Cary Grant? What about the rumors about his homosexuality?

Perhaps "sex appeal" in a man has to do with the man's preening peacock self -- my term for the inner need to show off, be admired by others. Perhaps the peacock self is part of the gift.

So what about Brad Pitt and Georg Clooney? 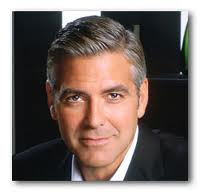 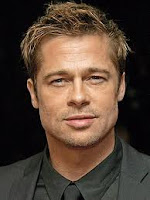 Look at their eyes, the focus that comes from the picture, and seems to be directly looking into your eyes.

Are they preening peacocks? Oh, yes, in my opinion, yes, they are.

What about drinking and womanizing? Well, Brad and George are another generation. I'm not formulating a theory about any of this ... I'm just reporting what I've noticed and experienced about favorite star actors from the sidelines.
Posted by em's talkery at 4:00 AM 7 comments: 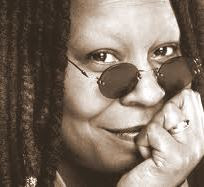 I've said it before and I want to say it again -- Whoopi Goldberg is uniquely "somebody" in every area of life -- private and public.

Her energy and more than her name are involved in helping people, in greening our country and other countries, saving children, saving animals ... Thinking in every direction, I wonder if there's any area of one's existence that she's ignored -- hasn't done something -- hasn't been involved?

Yes, I met her -- had a lunch with her -- blogged about her in 2009. We're both older and wiser, and have done a lot of things since then. Join me on the trip I made today, wondering how Whoopi feels about what's happening in our country today.

Her page in Face Book has 168,484 "likes." On Twitter, she has 99, 191 followers. She's major -- a major woman affecting what many other people think. On YouTube there's a video feast of what Whoopi has said, and done.

Here she is -- raising money for PBS, Sesame Street and the Muppets.

Whoopi, who's been wild and been through many ups and downs herself, is sympathetic and troubled about Lindsay Lohan, who keeps breaking the rules, heading back to jail. Like Whoopi, I'm fascinated by this exceptionally talented young girl. I keep hoping Lohan will outgrow it (like Robert Downey Jr. did), and take her place in Hollywood as a successful actress.

Oh boy, I loved this episode of THE VIEW about the Kardashians -- love what Whoopi, Barbara Walters, and Joy Behar say-- I can't stand the K sisters -- especially Kim, Kourtney, and Khloé -- they're my pet hates . . .

Aside from Whoopi's mile-a-minute brain, I delight in her wicked, almost, but not offensive, view of body functions -- she gets me laughing, enjoying her laughing at herself.

Bored by ALL of the Housewives shows, ALL the over dressed, desperate-to-look young spouses carrying-on about nothing, I enjoyed this VIEW -- though Black History isn't all that important to me, what Whoopi has to say about blacks makes me interested.

What about Whoopi's weight? She's getting larger and larger -- I wonder if it affects her sex life -- from what I know about her, I can't imagine this sexy woman doesn't have a lover. Anyhow, what Whoopi says about weight is great! I bet it helps a lot of overweight men and women.


Hurray for Sherri, Joy, (even Elizabeth), and Whoopi's tossing pantomime! What a comment,, what a woman! Here's what I said about her in December 2009: WHOOPEE FOR WHOOPIi
Posted by em's talkery at 4:00 AM 7 comments: