Drum sounds, the resonating deep boom of kettle drums get to me. 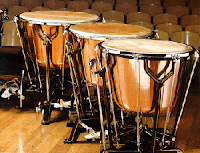 Jerry Lee Lewis on the piano, and all the film and sound clips of Elvis get to me. Willy Nelson, and other guys too, but Elvis and Jerry Lee, more so.

I'm talking about the booming drums that composer Gustav Mahler used in his Fifth and Tenth symphonies. Other composers have killer powerful sounds that get to you (Stravinsky, Beethoven, Bartok, each his own way), but I didn't change my life in order to dance to those pieces of music.

I did change my life -- I jumped through hoops -- in order to dance to Mahler.

I took risks, made commitments, because I wanted to dance with that sound under me, around me, surrounding me.

Mahler's Fifth is a seventy-minute symphony. (Authorities, teachers of choreography say: "A solo should be five minutes, ten minutes at most." So of course that made me more determined than ever to do a seventy minute solo.) What worried me was the second movement of the Fifth ... it seemed ... well ... boring to me as a listener. Nevertheless, I spent a ton of money on my Mahler project -- on the choreography and costumes which were created for me. Then, I proceeded to dance the Fifth in some famous, big-time, major theaters in South America, South Africa and New York City.

What next? Mahler's Tenth Symphony. It is rarely played by orchestras. Despite the nose-in-the-air professors who belittle the Tenth, because Mahler died before he finished it, I found the music goose-pimple thrilling.

I spent about two years, writing a two-character dance play -- "Zinnia." Casting an actress for the acting role, choreographing it, working with JC as director -- it was a five month "run" in the Colonnades, an off-Broadway theater.

What I got from dancing to the booms from doing the no-no-don't-do-it project, "Zinnia" -- from our energy, thought, passion, money, expertise, research, study, and endless rehearsals -- is what I get from sitting here and writing -- a full use of myself, brain and body.

So, now you see that I love to jump through hoops. High dive ... climb the stair to the 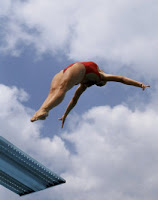 platform, climb beyond it to the highest rung, look down at the pool, the hoop below. I'm not a good swimmer, not a diver, but the bounce on the springboard, the moment up, up, and out out out in the air ... I'm flying ... soaring.
Posted by em's talkery at 5:23 AM