When our son, JD, was five months old, he said the word "light." When he was nine months, if we cued him, he's say "To be or not to be, that is the question."

We went on from "Mommy" and "Daddy" and "doggy," to the next line of Hamlet's soliloquy -- "Whether 'tis nobler in the mind to suffer the slings and arrows of outrageous fortune ..." And a week later added, "...or take arms against a sea of troubles, and by opposing end them."

It isn't really that amazing -- JD's daddy is an actor. Daddy was often busy memorizing lines. People loved his daddy and gave Daddy "jobs" in shows. And Mom danced, and got "bookings." Now JD's a full-time actor, who jokes about his jobs as "bookings." 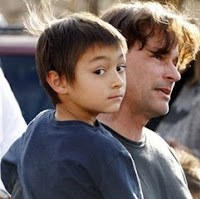 I figure the six-year-old boy floating around in a balloon, who was headlines in the news (he wasn't floating ... we just assumed he was), has the same background. His daddy and mommy were actors. They didn't have to teach him the Stanislavski technique -- who are you? where are you? what are you doing? what do you want?

It's instinctive, when you're pretending, to feel out who are you, to picture where you are, and see yourself doing -- doing something like bang-bang shooting, or shooting a basketball, or slam-banging a ball with a bat. And what do you want? -- that's easy -- you want Daddy and Mommy to say "Oh yes, that's good!" And chuckle, applaud, and hug you.

Yes, a lot of people were inconvenienced, worried, concerned, about the life or death situation of a little boy. It cost local, and state agencies money -- this "play" the boy's daddy created -- but it made them famous. The boy knew what that meant for him and the rest of his family

He's seen some really great things money can buy -- he knows the names of cartoon people and pop stars -- wow -- now his name, and his family's name, wow -- there are pictures of them everywhere.

Will Daddy go to jail? No, probably not. Will people come and take him and his brothers away from Daddy and Mommy? No, both of his mom and dad say -- definitely, probably not.

Did he do a bad thing by pretending he was hiding? No. He was in the play, doing what actors do, and he did a good job -- everybody knows his name is Falcon Heene and they're "celebrities" on Entertainment Tonight.

Mr. Something-or-other was in the living room talking about building a show around him and his dad, a series maybe -- money to pay off the old bills and new bills -- a big time deal, the guy said -- with music, flashing lights, and fans, guys with cameras following him on his way to school and on his way home -- like a pop star.

He heard Dad happy-bragging, saying "We did it! I'm proud of you," telling Mom whatever trouble they're in will be taken care of by one of the producer guys or agent guys from here on.

Okay, blog readers -- so now we know that Robert Heene, an actor, inventor, with the help of his actress wife and their kids created the hoax that has made him, for the moment, a "name."

When JC and I were coming up in the world our goals were relatively small -- a booking in Lincoln Center for me, a new musical for JC that would enhance his reputation a Broadway Star.

Times have changed -- the jackpot, the "win" is bigger, harder to get. You have to do outrageous things, but why not? Everybody in every field is doing it.

Rich, smart politicos have been getting people to march, protest, shout out ugly things at meetings, the more shocking the better. Easy as pie, you can hire a bunch of old folks to come to the town hall, even a church meeting, and make a ruckus.

The boy, Falcon Heene, hasn't been abused -- he's just been used. The media's more powerful than ever, and his father, Robert Heene, managed to grab them. He's "somebody" as long as he keeps the media interested, and he's getting offers -- he's a savvy guy -- one of them may pan out for him and his family.

I'm not cheering for him, but I'm curious, waiting to see what will happen next.
'
Yes, even though I'm one of those daily T V watchers and I tune out the sound of the ads -- the names stay with me. Like all T V watchers, I buy stuff -- things we might need, things we can do without. I certainly didn't need a phony balloon boy story, but I bought into the Heenes family adventure, and I'd tune in if there's more -- a second episode, even a third.
Posted by em's talkery at 5:04 AM

What really gave me a pang was when the little boy was sick on live TV.