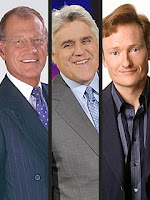 Leno is easy to watch. He's unpretentious -- a down-to-earth, regular guy, who doesn't work too hard at being funny or clever. If his audience isn't amused, he goes on to the next joke on his script. Leno is what he is -- a nice man, who is also famous.

Back in the days when Leno was doing his show at 11:35 p.m., I liked his chats with ordinary people, who were crossing the street. I didn't have to pay a whole of attention. The questions he asked, the unabashed ignorance of most of the people was pleasantly amusing -- pleasant because of Leno's amused, surprised reaction -- it was as if he sympathized with their ignorance.

In those days, if I was in the mood, I watched Leno.

Letterman's gimmicky stuff -- especially the collegiate-fifties humor of the "top ten," and his exchanges with bandleader, Paul Shaffer bore me. (Sorry Shaffer, but your music, humor, and style are dated.)

Leno's exchanges with his bandleader, Kevin Eubanks, are up-to-date and fun. And Leno's various gimmicks are simpler -- you may laugh or not react, but you enjoy the way Leno enjoys whatever it is, whereas Letterman, when he's participating in the top ten, and other gimmicks, has a dismissive, supercilious tone.

Yes, that's what is -- Letterman laughs at us, when we laugh at his jokes -- Leno laughs with us. Dave seems like someone who's faster, and sharper than you. Jay's more of a friendly, accessible pal.

Because the 10 p.m. Leno show was a wrong time (we start looking for a movie or news at that time), we peeked at Letterman. And then found ourselves hooked on the scandal brewing around him and his girlfriends. Letterman's handling of it made me like him more than I'd ever liked him before.

We didn't watch O'Brien. Letterman (and Leno) are more "our speed" than O'Brien.

About a year ago, we watched O'Brien for a few weeks. I didn't like his dance-step entrance. He seemed like a kid showing off. I didn't like his obeisance with prayerful hands, and the modest braggart, humble bragger airs -- or his gimmicks. I liked his drummer-bandleader, Max Weinberg.

I think NBC's decision -- returning Leno to his old time, paying off O'Brien, has made Leno into a wounded warrior -- not defeated but damaged. He failed at the prime time hour -- and now, somehow, Leno's on the verge of being out of date himself.

And maybe he is.

When Leno returns to 11:35, we may very likely gravitate to Letterman -- It's as if he's on a tightrope, balancing, joking, teetering -- it's relaxing, knowing he might fall, watching him never fall into the abyss.

Times have changed! How many times have I said that, thought it, written that recently? All this is to explain that right now, late night shows -- paying attention to stars, and pretty people -- wondering what's special about them, definitely makes me sleepy. I need the sleep.

Listening to the news jolts me awake.
Posted by em's talkery at 4:26 AM