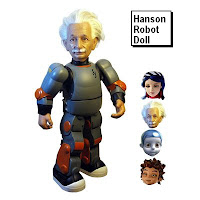 Want a pal, a toy, a helper for your home, or office?

University of Chicago's new library has a Librarian robot that sorts books faster than a human can. (I've worked in a library, sorting books -- my eyeballs rolled. I found it an almost intolerably boring job.)

In Ohio, Motoman Robotics created a bartender robot that mixes drinks in less time than a human takes, and can crack lame jokes. (How lame is lame? If I owned a bar I'd hire a real bartender.)

Google's negotiating, getting permission, so its robotic car that can drive itself, can be tested as a taxi service in Las Vegas. (Wow, you wave it down? What about traffic jams, and tips? What happens if you change your mind?)

Roxxxy made by Bell Labs comes with lifelike skin and artificial intelligence. (Gee, do you actually um ... uh, does a sex robot kiss you back?)

The pentagon is getting a "Mule" from Lockheed-Martin, a robotic truck that can fire missiles. (Yes, they're working on robotic soldiers.)

Self-service checkout at the supermarket, industrial robots carve animal carcasses in slaughter-houses, law offices have artifical intelligence software to read legal documents. Yes, machines are kicking workers out of their jobs. (So don't plan on being a cashier, butcher, or paralegal.)

Top-notch surgeons use robots. A medical bot can cost $2.2 million, says manufacturer Intuitive Surgical, of Sunnyvale, Calif. (It makes me nervous that they sold 400 of them just last year.)

Ever considered buying iRobot's Roomba, the vacuum cleaner? (I have -- love watching it bump around chairs, table legs but we don't have rugs.)

iRobot's also selling Ava, a three-foot-tall droid on wheels that tabulates data on a tablet computer (Gee. Ava could keep track of show biz doings, though with JC's manager and agent working for him, we don't really need to know who's doing what.)

Clearly, bots are already having an impact on jobs. And robotics are helping our kids, creating games, new worlds, and toys that shape young minds -- better than Smurfs, Elmo, windup cars, toy-soldiers or Barbie dolls. (Think--good God -- how many blondes we're seeing nowadays.)

The Hanson Robot Doll has changeable heads -- Einstein, Zenoa-do-it all boy, Alice do-it-all girl, and a head you can design. If you've got $15,000 to spare, you can buy your kid a sibling, an Uncle/Aunt, or get yourself whatever you need.

Hey someday, a robot could be writing this blog for me. Click, and see where we're heading.

What about a receptionist for your business?

Oh my-the sky is falling! We are being replaced by robots! Lol! Scary, but true is seems Em. The toy robots are OK, but the android ones are too close for comfort-they look too real. Leonardo is cute and cuddley. I think this all signifies that the human race is evolving, growing, and becoming futuristic which is a good thing. But, robots lack that beating heart, warm touch, and our treasured inate spirit. Remember the giant robot in the movie "THE DAY THE EARTH STOOD STILL?" He had the power to destroy the world...how far and how much power will the manufacturers give the next generation of ROBOTS? Think about it and be scared for a moment to the possibilities.

Sorry Em-the above comment was by kam
Kathleen Ann McGee
I forgot to write my name! Lol! maybe I need a robot to remind me!

I just read about a company that is giving free robots to lots of companies and organizations, with a bunch of apps for little tasks, like folding clothes and baking cookies. My husband and I fantasized about asking for one chocolate chip cookie each, and then listening to the clinking and clanking of our little robot in the kitchen.

All of these things make me uneasy,although I have often thought that the Romba was rather cute and wondered how well it would do on picking up cat hair.

I think it would scare my cats to death. As it is my boy Teddy is terrified of the regular vacuum cleaner.

I will stick to humans and warm fuzzy furry creatures for now.