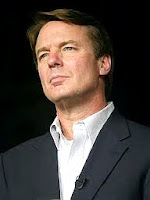 I am hoping that one of these days John Edwards will be out in the world, back in the world working -- working harder than ever -- helping people and redeeming himself.
Posted by em's talkery at 4:00 AM

I like John Edwards and supported him until the love affair story came out and his money problems. But, I believe in 2nd chances and he helped alot of people and did alot of good things. So, I think John Edwards can still help people and do good things but on a smaller scale. We will have to wait and see after his trial is over what path he takes.
kam Kathleen Ann McGee

In the beginning of the Democratic primary race, he was my top pick. I liked his policies, especially on Health Care.

I think the man is a sex addict. It is an addiction just like a drug addiction. But I mainly lost my respect for him when I learned what he was doing to his wife..a woman who was dying of cancer. I mean the affair of course.

I have read all kinds of things about their marriage and some not so flattering things about Elizabeth. We will never know the truth.

I no longer trust him and would never want him back in politics, but I agree with you, he has a very good mind and if he could focus it on helping people, that would would be great and it would help to redeem him.