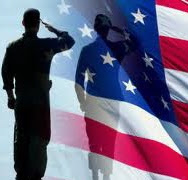 Many veterans who gave themselves to winning our wars are already back home.

We're patting them on the back, thanking them. And many of us are glad -- not thrilled -- but most of us are relieved that President Obama is bringing our armed forces home from Iraq.

I am not sure we've supported the wars and what our fighting forces have been doing. I feel guilty about this. The wars they've been fighting, the rebuilding they've been doing seems -- not wrong -- but gee, unnecessary.

I understand that we've been fighting to stop terrorism, to subdue the Taliban, and Al Qaeda but I'm in vaguesville, when it comes to who the enemy is right now, and what we can win.

What's strong and important to me is my deep disapproval of the wars. I can't accept our recruiting men and women to KILL, or BE KILLED when words, talks, meetings, negotiations, NOT fighting, but talking might accomplish the same thing.

Anyhow, it's good that we've been hailing Veterans who are coming home now, and applauding them. Yes, with parades and pictures of them in local newspapers, perhaps, but very limited medical facilities. Is there any sort of GI bill -- can they go to college, are they getting real help with jobs, housing, and money to help them reestablish themselves in income producing careers in America, 2011, and 2012

I learned from my reading, recently, about a veteran who's using leadership skills he acquired in the service to mentor young people. Yay for him!

Another veteran is now devoting his time to "HIRING HEROES," an employment program for returning veterans facing a tough job market.

There's a first response group of veterans -- they're organized to mobilize quickly, and help with disaster relief, in the Us and abroad.

That's great, but it seems minimal when it comes to how many veterans are getting help. And what about all the men and women who will be returning from Iraq?

I am VERY glad that attention is being paid, though, in my opinion, it's paltry. To me, it's because the wars we are fighting with billions of dollars and powerful good minds doing the very best they can to WIN, are not being won.

I haven't found an answer to what we are winning that justifies what we've been spending, and what's happening to men and women who fought these wars.

Here's a film -- a "sell" that I'm NOT pushing you to watch. It's saying what I've already told you, like an advertisement, presenting what's happening to our veterans optimistically.

The film saddens me. Okay, let's do better, do more for our veterans, but loud, very loud in my mind, is stop the wars, stop the WAR IN AFGHANISTAN.

Thanks for this, Em. Many of the vets I know got out, couldn't find work, so went back in and just made a career out of fighting instead of the original intent of volunteering to serve their country in its time of need. There's too much war and fighting.

1. My only child, a middle-aged daughter is a Veteran of Desert Storm. Through personal experience we learned the Veterans Administration in this United States is a bureaucratic nightmare. Forms, forms, forms, denial of benefits, denial of benefits, appeals. It's paper hell! Even after receiving daily log accounts which proved she & her soldier "brothers & sisters" were indeed under fire, which is indicative of "combat", which overturned one VA denial of benefits due to not having been in "combat", she still did not get her benefit needs met. The VA was not on this soldier's side. She was either E4 or E5 a Sergeant. We later learned this is standard operating procedure (SOP) for the VA from inception through that date.
* * *
The VA needs an overhaul, a streamlining in efficiency. That is the 'core' government establishment to begin to address & meet Veterans needs as they integrate & orientate back into civilian society.
* * *
Funding ~ the cost of a decade of war has bankrupted America...it's writing checks it can't cash. When citizens do that, it's 'criminal'.
* * *
Jobs for all, not just Veterans ~ America has a ton of infrastructure that is outdated, rotted, no longer viable...roads, bridges, dams, levies, railroads ~ I don't understand why there isn't a JOBS program like the depression days of old times to put American infrastructure right once again. A jobs program may have to be mandated by the government.
* * *
In the private sector, ordinary citizens & small businesses have taken such a huge economic hit & the companies and corporations that have best survived (& currently should have profits) were those who have made or procured things for the 'war machine'. i.e. specialized vehicles, weapons, gas, uniforms, food supplies etc. They certainly won't be hiring now!
* * *
I am completely against our National Guard having been & currently serving in foreign lands in a war capacity. For one decade of natural disasters the citizen soldiers of our country along with their specialized equipment have not been available for natural disasters. Fire, flood, hurricanes, tornadoes. States have done without the most useful & valuable resource to post disaster clean up & support. I wouldn't have minded if the National Guard had to have been deployed to a foreign country for a disaster in the short term.
* * *
Re-current deployments sending armed service people back 4-8 times has had & is going to continue to put a heavy footprint on what it did to their families, how many families it broke up, how many families are now without a parent, a father, a mother, a sister, a brother, a son, an aunt, an uncle because they died while serving. Those family members left are also veterans & victims of this decade long war. The course of their lives has also changed.
* * *
Here we go EM, this blog hit a nerve, & of course, I wasn't 'brief' about it. LUV YA & HUGZZ EM. I'm @grammakaye on twitter.

I just talked to a woman whose son-in-law recently returned from his third tour in Afghanistan. She said the happy go lucky young man has turned into a taciturn person, who disciplines his children too much, and frightens his family. He is not the kind of man to ask for help. It is so difficult.

It is always a true victory when our men and women fighting are coming home. And I agree with you about more needing to be said and done for our veterans coming home. I am sure Sally, Beth, and Heather will have more to say on this subject. I hope we find jobs for all of them and all the Americans at home that need jobs! kam Kathleen Ann McGee

God bless to our returning heroes and Godspeed to the ones we lost.

I totally agree with you. We should never been in Iraq in the first place...but we know why we were...Bush, Cheney, Haliburtin lining their greedy pockets on a war fabricated by the above and the other Neocons...GREED!

Afghanistan.... well at first I thought..okay great...go in there..find Bin Laden..Stop the Taliban...ya right...9 years later and how many lives lost...Bin Laden wasn't even there..he was being sheltered by our so called friends in Pakistan!

The Taliban???? Who knows? Alkaida is now all over the world I think.

What did we accomplish in 9 years of war besides killing soldiers, helpless citizens of those countries and their soldiers? How much damage did we do to thousands of lives? How many maimed, disfigured and amputees did we produce and for what?

No there is no more GI Bill....awful, awful awful!

the results are easily 10 to 1. the world would like the soldiers to come home. my brother just left to serve for the navy and is afraid he will be asked to fight for the wrong side. that is the most common fear of soldiers going in today. what are we fighting for but most importantly who are we fighting for. yes the soldiers were told they can come home. and some of them will be here, but soon they will be shipped off to africa for some other reason. standard procedure is, we are told they will be fighting for the economy/ democracy. but as in any predictable case in the past, we are going there for resources. the decisions these young man make are their own. good or bad I will salute them for their bravery an honor. I am always saddened to hear what some of them are asked to do, and to protect us, their family and friends they will do anything. I respect that. no matter how naive we are intended to be.