I PAY ATTENTION TO THIS WOMAN 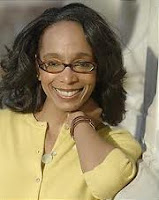 Her name is ROBIN GIVHANS, She won a Pulitzer -- she's the first fashion writer to win it. The Pulitzer Committee noted her for her "Witty, closely observed essays that transform fashion criticism into cultural criticism."

Givens has great credentials. She's 47, a Detroit, Michigan girl with degrees from Princeton and University of Michigan. She's worked for two newspapers, and Vogue Magazine in NYC, also, on and off, for the Washington Post, where she writes about fashion and currently covers First Lady Michelle Obama.

Before I knew who Robin Givhans was, I read a few of her articles in various publications, enjoying her down-to-earth writing style, liking the way she speaks her mind, amused that her bluntness creates uproars.

A few years ago, Givhans drew attention to an outfit worn by presidential candidate Hillary Clinton, declaring that Senator Clinton's V-shaped neckline was "unnerving" and "startling," especially for a woman "who has been so publicly ambivalent about style, image and the burdens of both." Givhans added, "It was more like catching a man with his fly unzipped. [You] just look away!"

Givehans has explained, "There are a lot of people who sort of say that something is good or important or progressive or edgy when in fact, it's just crappy. And no one will just say it's crappy, I also say when I think something is absolutely magnificent."

When Justice John Roberts was sworn into the Supreme Court, Robin said that his wife and kids resembled "A trio of Easter eggs, a handful of jelly bellies, three little Necco wafers."

Criticizing Michelle Obama for wearing shorts on a family vacation. Robin G. wrote, "Avoiding the appearance of queenly behavior is politically wise. But it does American culture no favors if a first lady tries so hard to be average that she winds up looking common."

Watching over our first Lady, Givhans says what she perceives and it's often what we are thinking -- "Eek, why did Michelle wear that -- my goodness -- does Barack like that outfit?"

Right now, Robin Givhans is trying to sell her Upper West Side one-bedroom pre-war co-op. She moving back to DC to be closer to the first Family,

I read this on robingivhans.com where she has a blog: "I would say that she (Michelle Obama] is extraordinary, but not exceptional, There’s still this perception that somehow she’s alone. That she doesn’t have a group of ten girlfriends who are just like her. I’d like to explore a lot of that and just put her into a broader context and try to get at some of the issues about race and class that she brings up."

Givhans goes on to say, "So I will discuss something far less stressful: The Golden Globes. I am most fascinated by the popularity of the mermaid silhouette. Perhaps it is just my own personal bug-a-boo, but I do not think that it is a flattering silhouette, pretty much on anyone. If you're too thin, it makes you look hungry. And if you're curvy, it makes you look like a sausage. And yet, it not only survives, it is embraced. To each starlet her own, I guess."

I say hurray for Robin G. I'm not a starlet. I'm not trying to be fashionable but golly, I'm very glad Robin Givhans is out there influencing many women who dress with the vogue.
Posted by em's talkery at 4:00 AM

I love any woman who embraces her talent and owns it. Both men and women prefer to think or speak within the confines of societal boundaries.

Good for her! Always love someone who holds fast and true to their convictions.

By the way, Em, you are included.

EM I love to keep a g-ma eye out on 'fashion'. This Robin G. you speak of certainly does have 'a way' with words! Mind you now just because I like to keep a g-ma eye out for fashion, doesn't mean I let it intrude into my own closet.
* * *
Ahh, blue jeans, sweatshirts in winter, blue jeans & colorful t-shirts (although sometimes faded) in summer, and GASP! ~ those awful shorts when the heat and humidity here is too much to bear.
* * *
Another great blog write as usual Ms. Em. Thanks for bringing Robin Givhans to our (my) attention. As per usual, much love to you, your John Cullum and FAMILY. I'm @grammakaye on twitter.

I think you'd agree with me when I say fashion is quite an annoying subject, since you've expressed your qualms about America's Next Top Model. From what I know about you, I think you like Ms. Givhans for her sugarless opinion on the matters she covers. God knows we don't need any more politically correct journalist and reports.

And I agree that there aren't 10 women who are just like Michelle Obama. She's a successful lawyer, she's tall, black, and the wife of the President of the United States. Many women, even long time friends could be intimidated by a woman of her stature, both literally and figuratively.

Not heard of Robin Givhans but I am not a worldly person. So, I learned something new today reading your very interesting blog about her. She is a shining example in today's mediafrenzy political news and her ideas and messages are down to earth and make sense. thanks for sharing her life Em. kam