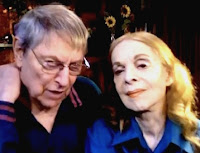 You and John make me smile! I think he could play any part-but glad he is happy playing grandpa in THE MIDDLE. I look forward to seeing this on TV soon. John is an amazing talented actor and I adore watching him perform. kam

So sorry for my absence. My hubby was on vacation and we needed to take care f some long overdue things. Will be catching up with your fantastic blog.

Love to you and JC

Enjoyed the conversation very much.

We were watching a Waltons rerun recently, one of my favorite sedentary pastimes, on which Grampa, (Will Geer), stated that he was 64. I 'bout jumped out of the chair. He's s'posed to be really old. 64 ain't old!!!

The chemistry between you two is wonderful. Keep up the good work. Earl

Em, I have started spreading my wings a little. I will be dropping @DennisCoble soon, since I now have the original acct back. I'm also using Google+, LinkedIn, Facebook, and a blog with Wordpress.

Ms. EM, your John Cullum's acting ability totaled me out, close to falling outta my computer chair laughing with extreme mirth.
* * *
What did this? The part in the video where John is looking directly into the camera while noting that he is too young to be playing the part of the grandpa. That was way way too believable. It had the ring of truth and all that.
* * *
You got your hands full Ms. Em, I can now plainly see where your John Cullum can be 'the dickens'. Congrats to John on the Grandpa part. Ima thinking John simply enjoys being a 'working actor' and we love that he is.
* * *
Much love to y'all and your FAMILY. I'm @grammakaye on twitter.