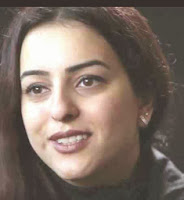 Newsha Tavakolian is a 32-year-old Iranian writer, reporter, photographer, whose photos -- a group of them entitled "Look" -- are now being exhibited in various prestigious galleries.

The photos, that can also be seen in Tavokolian's documentary, "Look," are dark, dimly lit -- a sad-faced woman sitting by herself -- a man alone who's smoking -- another with his head in his hands -- a girl alone staring at her birthday cake.

Each photo is just one person, doing nothing really, but
thinking. Quite a few of the photos feature a sad-faced woman, who resembles or is, in fact, Newsha Tavokolian herself.

A recent Daily Beast article explained that "Look" is portraits by Tavokolian of young Iranian men and women -- mostly family and friends -- visions through the various windows of a large concrete apartment building that is Newsha's home in Tehran.

'Newsha told the reporter, "I wanted to bring to life the story of a nation of middle-class youths who lack hope for the future and are constantly battling with themselves in isolation. Everyone hides this moment of insecurity through social conformity; you’d have no indication  of these private moments of doubt were you to walk through the streets  of Tehran.”

It's hopeful news, that a female Iranian artist in present day Iran, can find a way to get her photographs seen. Despite severe restrictions on women (and men), and censorship, she's found a way to express her feelings with photographs in which she seems to be dramatizing, un-dramatically -- aloneness, futility, the lonesomeness of life in Tehran.

Isn't this something all of us, at some time or other, have felt -- a sense that you are isolated while surrounded by people on a crowded sidewalk, by others in the line at the supermarket or people seated with you in the row as you're staring at a film?

Hey, I've been there. When I was 20, I created "Haunted Moments," a choreography to sound effects that included a cheering New Year's crowd. I reached toward them, and  slowly walked from upstage to the downstage edge of the stage, reaching, reaching to make contact, but being alone, couldn't.

"Haunted Moments" got raves and launched me. I was expressing what I felt very strongly -- isolation -- intense loneliness in a crowd.

As you are starting out in the arts, the things that move you pierce you like an arrow in the heart; they almost crush you with the weight of what you feel. You are sure that what you feel is felt by many others.

Looking back on how this early work launched me, I understand that photographer Tavokolian is expressing what she's feeling -- searching, but unable to shout what she feels.

Now that Iranian President, Mahmoud Ahmadinejad, has been officially replaced, and there is a new president, Hassan Rouhani, perhaps life will change for Iranian men and women, who have not been able to express resentment, despair, anger -- who need to rebel, and have had to quash all rebellious instincts.

Even so, Nashwa, working as an artist since her early twenties, has covered wars, natural disasters and events in Iraq, Lebanon, Syria, Saudi Arabia, Pakistan and Yemen. She has been published by major news magazines including.Time, Newsweek, Le Figaro,  New York Times Magazine, Le Monde, and National Geographic. Her photos have been shown at The British Museum, The Victoria & Albert Museum, LACMA and The Boston Museum of Fine Arts.

I bow to all that.

I can't bow to "Look" -- I am not moved by this collection of photos she's has been taking for about three years, though I am very interested to see where Newsha's heading artistically.

A playwright friend of ours, John Bishop, (he wrote "The Trip Back Down" that was presented off and on Broadway), advised us when we were re-writing the negative ending of one of my plays before its opening night: Bishop said, "Go for what hurts. You have to find a way to  express the very worst of what you don't want to say because it's too  painful."

We were seeking success -- we wanted a positive, applause getting ending to my play -- we didn't go for what the play was really saying.

I think, after you see this Tavokolian's video, you will also be wondering with me, what Newsha Tavokolian's next projects will be -- hoping that she'll be bolder, much bolder and  more daring, and be able GO FOR IT.

What a beautiful young woman she is!

I agree with your opinion of 'Look'. The photographs are all too 'pretty' to engender emotion in the viewer. However, I do look forward to what she might come up with next.

These images invoke sadness and lack of hope, and seem to me to represent a view of Iran that chimes with the opinion of many western observers. I found them eloquent and poignant.