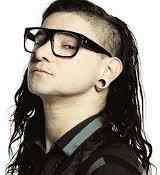 I saw this photo and thought self indulgent kid, before I took in the headline, "King of the Imperial Blaster Beat, Skrillex is making a big noise in the pop world."

This kid won six Grammys, and I have a hard time (very hard time) listening to him. I sort of enjoy the beginning of a song, but the development becomes a mish-mash of smashing, crashing sounds that makes me want to cover my ears.

I am paying attention to him because he is already more than a trend in music. Kids love him.

Sonny John Moore, a/k/a Twipz, Skrocle, who is now called Skrillex, is 26. a DJ,  music producer, electronic musician, singer-songwriter. He grew up as a short (5'4"), punk-rock loving kid with bad skin, which apparently inspired him to relate to fans with similar social anxieties.

Sonny Moore joined the American post-hardcore band, "From First to Last" as the lead singer in 2004, and recorded two studio albums with them -- (I love the titles), "Dear Diary, My Teen Angst Has a Body Count," and "Heroine."  He left that band to pursue a solo career in 2007 and his first tour as a solo artist.

In 2008, Sonny was producing and performing as Skrillex in the Los Angeles area. Two years later, while providing programming and vocals for the UK metalcore band in their album titled -- (I love the title), "There Is a Hell, Believe Me I've Seen It. There Is a Heaven, Let's Keep It a Secret," Sonny worked feverishly on creating music for himself. 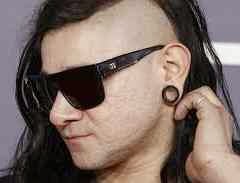 At his January 2013 birthday party, celebrating the release of his official Skrillex debut EP as a free download, Sonny Moore's hair caught on fire. (Though he was unharmed, it brings back memories of Michael Jackson, and perhaps explains Sonny's hairdo that suggests half of his head is shaved.)

In March  2014, Skrillex's "Alien Ride" was put up on Apple's App Store. He told a huge crowd of reporters, "I’ve been deep into electronic music my entire life. The first records I ever owned were ‘Fat of Land’ by the Prodigy and ‘Come To Daddy.’ I’ve been dabbling in making electronic tracks on programs like Fruity Loops since I was 14 years old.”

No doubt about it -- Skrillex is part of a new generation of artists that refuse to be restricted by audiences' expectations. He insists -- “Genre has never been important to me. I’ve never thought about music that way.”

Yes, I am playing Skrillex's music -- sort of learning and absorbing it. I remember when I was working with choreographer Norman-Walker on "Medea," to music by Alban Berg. As we began rehearsals, I hated the complicated twelve-tone, unmelodic, jangling, weirdly unsingable sounds. And sung it, and fell in love with Berg, as I learned to dance to it.

The New York Times said, "The artist that 13-year-olds play the most, which 64-year-olds also play the least is Skrillex."

Check out this video -- it comes with a warning -- "You must absolutely see this video until the end to get the full effect of what is actually happening here."

Like it or not, the "full effect" didn't impress me, but kids love this and dance to it.

Skrillex is actually part of the genre called "Dubstep," which is a type of electronic music that has a reverberating sub-bass -- not four-four beats -- it's spaced, syncopated percussion that you may have heard in a Lady Gaga album, or recently, in Britney Spear's "Hold it Against Me."

Listen to this video -- just music, no story -- the repetitive rhythm gets into my bones. Maybe it will get into yours.

If he's clean, non-abusive, non-hatred spewing and doesn't promote stupid behavior, I say he's fine.
NOT my cup of tea, but I'm not 18 anymore. He's 'in' because he's having fun and those around him are having fun.
I actually like an occasional 'Trance' song when listening to music at work. The rhythms can be soothing and intense.
Same way I like an occasional Conway Twitty or Andrea Bocelli song.
The rest of time, for me, it's ZZ Top, Beach Boys, Mozart, Bach and other assorted performers. Maybe I'm just weird. ;-)
Variety is the spice of life.
As for this gentleman's 'music', I'll leave it more than take it, but it's always a good thing to stretch your experiences and live just a bit on the edge of normal.
If you stand in one place too long, you'll grow roots. ;-)

Em..in my line of work..weird is normal..the police and admitting nurses in hospitals are probably the only people who can truly relate...but as my Mom would say "To each his or her own"...there is always the other side of the street to walk on.