Back in the days when Emily was working as an actress, John Cullum and Emily were in love with the idea of doing "Night of the Iguana," a play by Tennessee Williams, that had been done on Broadway and in films. 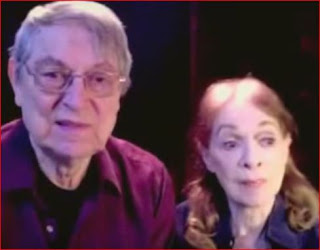 John liked the idea of tackling the role Richard Burton played in the film. John thought Emily would be wonderful in Deborah Karr's role.

What a meeting it was--drinks, lunch and chatting with Tennessee Williams--getting his advice and his  feeling about what we should do.
Posted by em's talkery at 4:00 AM

Did not see this before I commented before.... Ahhhhh... :) (Still would love to see it...Maybe in another life)? LOL. So OK..."Noit a PERFECT PLAY", but, you guys are SO awesome together. You've got to do SOMETHING else together (and bring it to Boston). JoniRapp :)

Tennessee Williams is one of my favorite playwrights. Too bad you didn't try to get "Night of the Iguana" produced. I would have seen it, for sure.