MAN GIVES BIRTH TO A BABY

This photo of a man in Time Magazine stopped me, stunned me, repelled me. 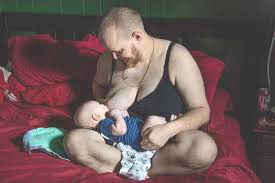 It seemed wrong, felt wrong, haunted me, and continues to bother me.

The article is about a man, who was born as a female, became a male with medical help but no surgery, and was artificially inseminated. Specific, intimate details about this are in the magazine story by Jessi Hempel, titled: "My brother Evan was born female. He came out as transgender 16 years ago but never stopped wanting to have a baby. This spring he gave birth to his first child.

Even as I read the article, I was distracted -- stuck on finding out why the photo repelled me.

"Abnormal" -- that was the word on the tip of my tongue. It got me wondering if "abnormal" is the same kind of thought that pops into people's minds when they react to other races, religions -- to the lesbian, gay, bi-sexual,  transsexual LGBTers.

How can I exorcise, or change, or re-focus what I think of as "normal?" Golly -- my repulsion, my reaction to the photo is what growing up and living in today's world has drilled into my mind.

I went googling around on my computer for other opinions. Here are the links. On Defense of Reason, I read how religion plays a major role in what we believe and accept as good, bad, or wrong. I looked at page called Live Science that explained how the status quo is a moral codebook -- a way to decipher good from bad and right from wrong -- that told us that the existence of a behavior does not mean it is good -- slavery and child labor, for example, are still popular in some parts of the world, though neither is right or good. On Bertrand Russell "Scientific Method,"  a subject I'd studied years ago, I learned again:  First, observe the significant facts; second, arrive at a hypothesis which would account for these facts; third, deduce the consequences of this hypothesis.

I reopened the magazine and studied the other pictures the article provided, and re-read Jessi Hempel's last few paragraphs. 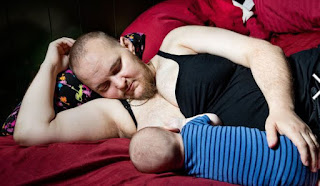 "...The Obama Administration declared that all public schools must treat students equally regardless of their gender identity ... There's a backlash against the "battle of the bathroom" -- many states are now suing the Obama Administration. Violence directed at transgender people is up 62% from what it was in 2015. In June, we had the mass murder an Orlando nightclub, the deadliest incident of violence against LGBT people in U.S. history. More than likely, pregnancies like Evan's, and the many that are likely to follow, are surely going to stretch our cultural perceptions of gender norms even further ..." 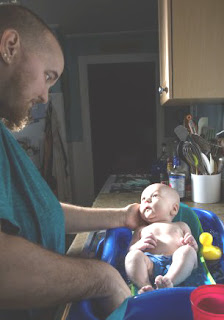 So all I can do is observe, and live
with open eyes in a world
that is changing.

And adjust to the changes.

And see the tenderness, enjoy the look of a baby and its loving parent.

And yes -- oh my yes -- love is there, and love is lovely to observe and feel.

Wow, Em. What a wonderful essay. We do need to stretch our world view more and more to be able to accept that which we at first do not see as "normal." I love that you gave the links to all the articles that help us understand why we think the way we do. Expand, expand, expand....

Oh my gosh. She had a test tube baby and they Does not sink in it's own brain. . Were is Dr. phil when we need him Geez lol

It helps if you know Trans people. Then you get over the feeling of wierdness very very quickly.

It is an adjustment, that's for sure. In recent years I read an article about a research study that showed that those subjects who paused to take note of other people's differences before making decisions about how to respond to people who were different were less likely to react with prejudice. That suggests that admitting our initial hesitation can actually help us toward understanding and acceptance. According to the study, those who tried to ignore differences tended to have a harder time accepting them. Your response is so honest, and to me makes it only clearer that you're an open-minded, open-hearted person. Change is not easy, but when we accept each other despite our discomfort, we build a more peaceful world. Thank you for all you share, Em.