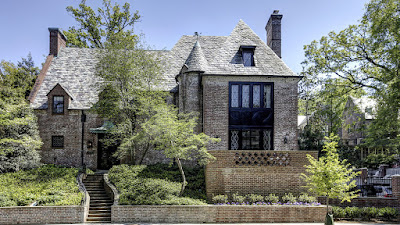 
Interesting facts:
This 8,200 square foot brick Tudor mansion, owned by White House press secretary Joe Lockhart, is currently valued at $7 million. Though we don't know what the Obamas are paying for it, it would cost  $22,000 a month to rent, according to Lockhart's real estate agent, who lists the house as meticulously renovated with courtyard space for 8-10 vehicles. The mansion is next door to a former congressman,  down the street from the French ambassador's residence, around the corner from the oldest house in the city, and about a half mile from the D.C.home of Hillary and Bill Clinton.
Posted by em's talkery at 4:00 AM

Nice to think of the little apartment for Michelle's Mom.

Fantastic = They Deserve It = Thanks For Sharing This Info

Nice looking place for sure