Yay Technology!!!  Elton JoHN  is at work nowadays creating a  post biological self.  Accodiing to NEWEEK,  with the help of top A.I. techologicy guys, Elton is creating a robot Elton John that could go on tour after the he's is gone, performing his songs, --also  new ones  the Elton bot can write based on todyas news. 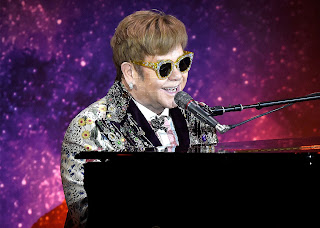 .
The fact is, many musicians, reeling from the shift to streaming music which pays artissts a fraction of what they used to make on CD sales -- are learning everything they can about about  bots thatd help them earn big money again.

Spotify, Google and some  startups, like Juke Deck, are working on AI songs. Hey,, in a decade the Grammy might go to a piece of software. Spotify recently hired Francoise Pachet, Ai Scientist, who led a company science lab for Sony, to run its new " Creator Technolgoy Research Lab." Sp;otify is looking into the possiblity that virutal artists playing on Spotify, can earn the company a ton  of money  without paying royalties.

Pachet is careful not to sound greedy  He a recent interview he speaks of AI reveerentlyh, as songwriting partner tha tay " lennong needed a a McCartney.  Pachet, and a a group of other AI  scientific specialists, instrtucted Ai software to write a gong and instrumentation that mimics the Beatles. Using, Humans  to create lyrics, they they refined the AI  arrangement. The result' a song posted online "daddy's Car" sounds as if the Beattles cranked out a chipper jingle.

Hey, AI hasn't written a hit yet doens't mean it won't. the sheer number of songs it can write guarantees that it can. Beattles recorded 237 original song;.,s Jackson 137,  Ai can too, iin the time is takes Mccartney to press a pinao key.-- AI canme tens of milioins of songs, and one of them might thrill us, knowck us out.

Hey, I like music, I'm not sure I like where this is heading, but I'm sharing with you what I;ve learned, so you can be in tune with the times.