This blog is what I need to say every year around now. The feeling I have demands that I say it again, and again.

The candle on the table, the shoulders seen on each side of John indicates that other people are with him. The photo is John as "Rutledge," the Senator from South Carolina thinking about how he'll vote while other senators are voting.

Golly, the look on John's face is so real--typical--just the way my husband looks when he's thinking about one of our domestic problems.

John told me that this scene in the "1776" film had been done as a long shot, then cameras and lights re-positioned for the medium shot and filmed again; the setup was again changed for the closeups--he'd already sung "Molasses to Rum" twice. He told the director, Peter Hunt, "Better get it this time, I've just got one more "G" in me."

(JC told me just now that if I listened to the film again, I'd hear how he "slipped into the high note," that "G." He's a Baritone--a G can be tricky.)

Wife, fan, lover of John Cullum delights in studying that photo of the man she fell in love with at first sight, the guy who had evolved from a very good looking, handsome, leading man on a stage, a leading man who could rivet an audience--into a man who could truly star in a show and draw thousands of theatergoers. 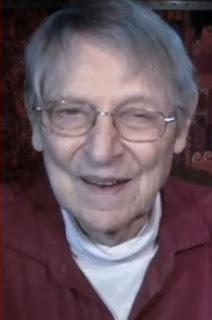 Why am I jabbering about all this? I'm doing it to remind you that people with whom you are intimately involved change, grow up as you do, and viewing them freshly, grows you up too.

Here's John yesterday at noon--at his computer, reviewing lyrics from "On a Clear Day You See Forever," one of the shows he starred in on Broadway.
He's already meticulously rehearsing what he'll be talking about and singing in his One Man Show, at Studio 54, in September.

Love your beautiful relationship with your talented husband John.