Why is this guy becoming someone I have to contend with every day? Along with MJ being turned into the media's new Anna Nicole Toy, And the health care war, the Ask Don't Tell issues mixed into a pudding with the S. Carolina Gov's guilty-boy ramblings.

He's Japanese specialist, Nakayama M. Epley. A medical person who had made a

series of simple exercises you do if you "BPPV." (A benign inner ear problem that creates light-headedness, which comes and goes.)

Yes it's "Vertigo." But I'm not using medical terms today. I'm trying to untie the knots that I seem to have been tying around myself.

A million years ago this past March, I wrote a post 'GOING TO THE DOC" and mentioned the 125 physical therapy exercises I had to do in order to re-learn how to walk.

I stated loudly -- I don't want anyone telling me what I can do, should do. Shouldn't do. Or give me permission about anything.

Whoops -- (I didn't realize till I re-read the post myself just now). I refer to "water" in my left ear. But a note I made for myself in April of 2008, clearly refers to water in my right ear. So it's moved, from ear to ear.

Last week I saw Mike (my doctor) and based on his exam, Dr. Em had herself diagnosed correctly . It's a temporary condition -- not serious, not anything to do with tumor, cancer, stroke or any other bad stuff. Mike said he'd heard there was a physical therapy treatment for it. Something new. Did I want him to check it out? I said no. 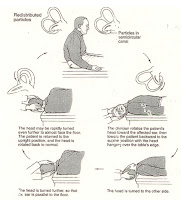 At home, having seen a reference to "new physical therapy treatment," and pictures of it, I printed out the Epley "maneuver" exercises. Look to the left -- don't they look simple? Probably these exercises help the inner ear repair itself.

Then I found a YouTube film that shows you what to do. IF you know which is the "affected" ear. Want to try it? Just click EPLEY MANEUVER.

What point am I making? Right now JC is in his office, laboring over making me a simplified copy of what's in the Merck Manual. There are 5 variations on YouTube. I'VE TRIED THEM. There's even a test you can do to figure out which of your ears is affected. I DID THE TEST. IT IS BOTH EARS.

I have 3 different ways of doing the Epley typed out. Plus the new version JC typed out making it sound ... Simpler? Slightly different? I don't know what to do, unless I compare all the versions.

Dr. Em is thinking right here as you read this -- S T O P. The shoe doesn't fit. The exercise DOES NOT work for you! Do your nightly dancing, and handle the dizzy feeling you get when you jump (there are jumps in the dance) by changing the jump. For the time being. that's what I'm going to do.

Email ThisBlogThis!Share to TwitterShare to FacebookShare to Pinterest
Labels: current, health, private self