Here's what I'd say to you Hillary, if I could pick up the phone and talk to you.

You've been a focus, someone to think about and address in my mind for many years. I have watched you change, aware of changes in myself -- my own ageing and adjusting to changing circumstances.

Your dark eyebrows, your eyes-- "strong eyed woman" was my first impression. The first time I saw you, you and your husband were on a major television show, discussing the rumors about a girl who claimed she was Bill's mistress for a long time.

I was riveted. The two of you seemed to be a very "together" couple -- neither amused or annoyed by the interviewer's questions. Quite casually you and Bill established that nothing happened. That Bill was playing around seemed unimportant -- whatever happened was a thing of the past.

(If we'd known about Bill's playing around back then, before the election, he might not have won. Infidelity was, and still is, maybe now more than ever, a serious negative for any candidate.)

Anyhow, I decided to vote for Bill Clinton. I liked the youthfulness of the two of you.

And then he was President Clinton. And you put together a healthcare plan that was kicked around, negated, ridiculed even, and rudely dropped. I wondered why the President had promoted it -- wondered if you were a pushy wife, pressing him to promote what you'd worked on.

Your health-care plan that failed, hung over you -- it's never gone completely away -- it was a spot on a pretty dress that couldn't be removed.

But we had Chelsea -- the three of you together, a real family. Other news flashes about you and a man who committed suicide, rumors about your love affair with him, and Kenneth Starr investigating Whitewater ... It's faded but lingers as a shadow in the Clinton's history.

All this seems important as I recall the look of you, pictures of your house in Chappaqua, New York, and you winning the election, and becoming Senator Hillary Clinton -- the joy and sparkle in you, the feeling I got that you were becoming you. And Bill's enthusiastic response to your winning was great! The Clinton family image was stronger than ever.

There are other visions, but the past is not as powerful as the present -- what he is and what you are right now, today.

Monica Lewinsky stuff was bad. Bill's still paying for it, even though he's a number-one, top man in the world. (To me he is.)

How you've handled all that has become a crown you wear.

Your presidential campaign -- your ideas, clarity, power, knowledge, wit, humor, honesty, and what Bill and Chelsea added to all that -- and what you are doubled, tripled in importance. It's fresh in my mind. There's no need to recapitulate how you lost the presidential primary election and became a heroine for women everywhere in the world.

What you are now is why I'm phoning you.

You've evolved from the almost-president Hillary to the full-grown tree of Hillary Rodham Clinton, trunk, boughs, branches, twigs, and leaves that hang protectively over our country.

The piquant, ha-ha look on your face on the cover of Newsweek, says: "Think what you want, folks -- 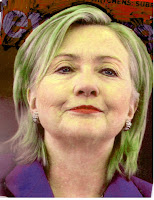 The facts reverberate -- what you accomplished in Copenhagen, you playing the heavy with Iran, Russia, and even Israel -- also with North Korea, China, and connecting with National-security adviser Gen. James Jones -- the half-million miles you've traveled with your lists, (what people call your "Methodism") it's on my yay-for-Hillary list. (I'm a list maker like you.)

I applaud your re-connecting with John Kerry, the two of you meeting with Afghanistan's Karzai, your bond with V.P. Joe Biden, your machinations to get a major military-relief operation going in Haiti, the town hall meetings you call "town-terviews" that you do in foreign countries with local citizens, local media. And Bill ... (thinner, wearing spectacles, still very much tender husband, and international political leader) -- I love the way he said NO, to the idea of you or he being a Supreme Court Judge, because "we're both too old."

The changes in you that symbolize, (to my female eye eyeing another female) the new, older, wiser you -- shorn hair with just a few, modish, loose locks, your tailored outfits that convey a business-like, efficient, authoritative, Secretary of State's I AM WHAT I AM pride.

Thanks for being there, and being you, Hillary. You inspire me to ignore ageing and go after my work, do my work stronger, sharper, better than ever.
Posted by em's talkery at 4:12 AM