What can we do about Styrofoam cups? 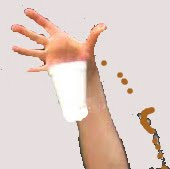 Starbucks has worked on finding a re-usable cup. McDonald's talks about making a new cup that keeps coffee hot and wouldn't cost the store too much money, that's recyclable and compostable, (Styrofoam cups are not).

There's already a guy with a nickname -- "Joey Cups." He, with a team of twelve, have been searching for a Styrofoam cup for Dunkin Donuts.

It's a big deal, money-wise, and as well as cultural, with the amount of coffee that's bought and drunk every day. Current guesstimate: Starbucks services approximately 3 billion customers per year -- it boils down to 462 customers a day or 29 beverages per hour.

Right now, Starbucks, Dunkin Donuts, and Tim Hortons are working together to find a way to recycle beverage containers, and make it a financially smart move.

In Canada, the equivalent of McDonald's is Hortons, a chain started by Tim Horton, a famous Canadian hockey player who died in a car crash in the mid-seventies. His business partner expanded Hortons into a multi-million-dollar international franchise -- 3,040 stores in Canada, 587 in the United States, and franchise deals in the UK and Dublin, Ireland.

Statistics: Roughly 20 million trees and 12 billion gallons of water are needed to manufacture the 58 billion paper cups that end up in the trash every year. (I can't picture a million or a billion cups, gallons, trees, or dollars, but to me, the numbers are shocking.)

Furthermore, most communities can't recycle coffee containers. You have to separate the exterior of the cup from the wax-like inner lining that keeps coffee from leaking out of the cup, and they don't have the equipment.

Also, the US Food and Drug Administration restricts how much recycled fiber can be used in products that come in contact with food.

There isn't a solution yet. Someone came up with the idea for a "Karma Cup" — not a cup, just, the idea that customers could be rewarded with a free cup of coffee after bringing in their own mug, after a certain number of times. Or perhaps the 10th customer arriving with a re-usable cup could be rewarded. But how to keep track hasn't been solved.

Starbucks has featured re-usable mugs, but not very successfully. These mugs are involved in less than 2% of its sales. The fact is, most consumers walk out of the stores with their cups of coffee, and coffee cups can't end up in a landfill.

There's progress. The rivals stores are working together with inventors, trying to create the best "green" cup and sell owners of paper-mills on making shipping boxes out of recycled coffee cups, figuring out ways they can collaborate -- for an example -- getting recyclers a large volume of green cups from all their stores. It makes good business sense.

“It’s really a lot more complicated than people want to think," said Jim Hanna, director of environmental impact at Starbucks, who recently hosted a "cup" summit at MIT. “There really is no alternative but to get these people working together. And you just keep pushing until you get to the real solution.’’

Is solving the recyclable coffee cups problem a prelude to solving what to do with babies' diapers? Sure!
One smart thing we learn
to do about recycling can breed t

he next, and the next.
And hey, one of these days we'll have green-electricity running the laundry machines that wash our clothes in green water.
Posted by em's talkery at 4:16 AM

Ever notice that coffee left to cool in Styrofoam or other take-out hot coffee cups tastes bitter, even plasticy? Well, that's the wax that lines these cups is soluble and not particularly healthy to ingest. If one can't remember to bring their own cups to the drive through for purely environmental reasons, then consider the health benefits of ingesting polyethylene.

Polyethylene, for you nonchemists, is the same plastic laced with Bisphenol A that makes plastic water bottles. We know the health concerns about those! In addition to creating safety problems during production, many chemical additives that give polyethylene products desirable performance properties also have negative environmental and human health effects. These effects include: Direct toxicity, as in the cases of lead, cadmium, and mercury; Carcinogens, as in the case of diethylhexyl phthalate (DEHP; and
Endocrine disruption, which can lead to cancers, birth defects, immune system supression and developmental problems in children.

Going green? You have two choices: you can "green" the environment by filling your own cups with hot beverages at take-out establishments, or you can turn yourself green with chemical toxicity by not.

Where I live, in Santa Cruz County, Styrofoam packaging used for delivered take-out food was banned a few years ago. They use heavy recycled cardboard like containers instead.

We are also awaiting the banning of plastic and paper shopping bags in stores. One would have to provide their own bags instead of the store. Our local Trader Joe's has, for a number of years, been giving a discount, at the check out, to people who bring their own bags or sacks.

This is an area of the country that has been way ahead on issues like that.