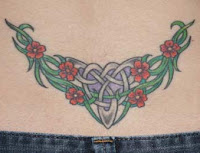 Do you have a tattoo? Have you considered getting one?

News Guide U.S. says the tattoo business in the U.S. is thriving, despite the economic downturn, making roughly $2.3 billion annually at an estimated 15,000 parlors. A Pew Research Center study (Pew is a DC think tank that provides information on trends), says more than a third of Americans ages 18 to 25 have a tattoo; 40 percent of folks in the 26 to 40 range, and 10 percent of people age 41 to 64 are tattooed.

I have to say that the idea of decorating my own body with any kind of permanent decorations -- tattoo, nose or earring jewel -- doesn't really appeal to me. I like to change my "persona" -- be chic, or a tomboy, business woman, schoolgirl. With scarves, hats, shoes, spur of the moment, I can be a gypsy in wild colors and sandals, bedecked in necklaces, bracelets, earrings and finger rings.

What about you? If you got a tattoo, would you want it always on display? Only displayed in private?

And that breeds another question -- what's the reason for getting a tattoo? Because tattoos are art? Because they're sexy? 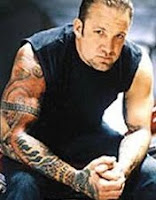 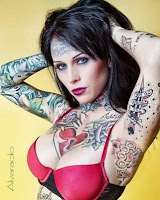 And Michelle -- what's-her-name -- all her tattoos, the way she blabbed, is still blabbing about her hot affair with Bullock's ex ...

What did Bullock love about this Jesse James guy? The macho look of him? Couldn't she perceive what he was?

The fact is, if someone came to my office and applied for a job, I would be less inclined, NOT inclined, to hire a person with tattoos. Instinctively I feel if you're tattooed you're narcissistic, a bit wild, like some "biker."

Other employers probably feel the same way. Perhaps that's why getting tattoos removed, is also a budding business.

The Academy of Dermatology points to a 2004 survey that found nearly one-fifth of people with tattoos had considered getting their body art removed. The cost of removing a tattoo is high. "Our average client spends between $800 and $1,200 to get a tattoo removed," says the CEO of "Ink-B-Gone Precision Laser Tattoo Removal," explaining that the typical tattoo can take five or six treatments, sometimes a year-and-a-half to remove -- the skin has to heal between treatments.

Actually, the people I know who've been tattooed say it makes them feel good about themselves.

American Indians, African tribes, Aborigines have fantastical tattoos and piercings. With our streets, our cities getting more and more crowded, maybe we're returning to those primitive days, and need to be different -- need to emerge as an individual -- be one of a kind.

I admire her acting. I love the way she rose above the negative publicity about her unfaithful husband. Gee, is Sandra why I'm writing this, and sort of vaguely considering having my skin inked and decorated?

A flower? A couple of leaves on a vine? What color? Sort of no color blue gray? Middle back, lower back -- I'd never see it. Where would you put a tattoo? On your buttock, hip, top of your thigh? A pattern, words? (Good God, not words -- you'd be stuck with them!)

Well ... I don't need a tattoo, don't want one -- it doesn't fit with my life style, but if you are thinking of getting one, well ... I've love to know why. Maybe I'll consider getting a tattoo when the weather's warmer, maybe next spring.
Posted by em's talkery at 4:06 AM

I have three tattoos, all within the past two years---a G clef on my right hip (I love music, and sing), Martin Luther's seal on my left shoulder (I'm a Lutheran, and thought it would be cool) and a seahorse on my left thigh (I love seahorses). I saw other people with them and just decided to do it. They're all easily concealable if need be (I can always cover the Seal with makeup). Just these three though, no more! :-)

I've always wanted to get a tattoo, but it would have to be something carefully designed and planned out - I'm not getting inked up for nothing! I want something that commemorates my love of music and theatre & my Irish heritage. All in one - nothing big - and most likely on the ankle or calf.