I was a gue

st artist at the International Dance Festival du Cologne -- they were paying me well -- one performance only -- the other artists on the program were all recognizable names.

I was an up-and-coming name, excited, tickled, to be there. My "Elektra" was choreographed by Todd Bolender to dissonant modern music by Hans Werner Henze. Both were names in the dance and music worlds.

My costume was a white body suit. The solo began with me wrapped in a white rug, rolling in, unrolling till a torn-looking white cloth rug covered the entire floor. 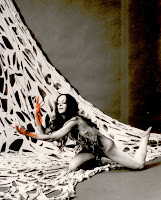 Rising up, in a lyrical adagio depicting Elektra's memories of love, my movements accelerated into passion, then murderous rage. It ended with me in a victorious pose, arms up high, blood dripping from my upraised hands.

My solo had received good reviews in New York. I figured it would be a hit with the European Press and the Festival's international audience.

I planned my curtain calls. First -- with my bloody hands behind my back, a deep bow. Then I slipped on my gorgeous, floor-length, white silk caftan --it took 20 seconds, For the second curtain call, , as the front curtain opened, I'd enter from the back wall of the stage -- proceed slowly downstage to the footlights -- open my arms as if embracing the crowd. Then, curtsy deeply, accepting the applause.

Before the performance, I nibbled on a square of chocolate -- you don't eat if you're performing in a white body suit.

There was a welcoming trickle of applause as I began the rolling entrance. The packed house was riveted as I unfolded myself. You could hear a pin drop, as I rose up from the floor, and my body in white was completely revealed.

(Even as I tell this story, I get a knot in the pit of my stomach.)
My first steps ... okay. Balancing . a tiny jiggle. Cursing myself -- in dance, like in ice skating, when you flub, an audience is eagle-eyed, watching to see if you'll flub again.

I conquered the agony, and went on to the climax -- found the b

lood bag (a tiny balloon hidden on the rug), pricked it with its pin, bloodying myself.

Someone started clapping ... I sense the audience is stunned -- I'd done the ending brilliantly. Guttural low sound ... is it a moan? Bloody hands behind me, I lower my head, and bow.

Curtain closes ... boos ... definitely boos, and clapping hands applauding louder. I rush upstage, wipe my hands on the towel my dresser hands me while helping me into the white silk caftan -- ready to take the leading-lady star's bow I'd planned, rehearsed with the stage manager and stage crew!

I do it. Head high, I enter from the back and do the long walk, proceed to the footlights in my gorgeous silk caftan, open my arms as if embracing the audience and do my deep, graceful curtsy, as boos and applause are mounting -- warring. Front curtain descends slowly ... dear God, so slowly -- will the stage manager bring it up again. Will the ordeal continue?

More about cheers and boos tomorrow.
Posted by em's talkery at 4:00 AM