Sally Field has always been a sympathetic, believable whatever-she's- playing -- union organizer - mother - loving lover - victim. Every role she plays is truthful, as if the girl/lady/woman is the real Sally.

For the past six years, Field has been the spokeswoman for Boniva, the-once-monthly medication for the treatment and prevention of Osteoporosis (thinning bones, pain in the joints), in postmenopausal women.
. 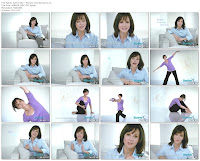 In each ad, Sally is busy exercising, or playing, doing a lot of bending, telling us how great she feels, because she's taking Boniva.. Sixty-four-year-old Sally looks fantastic -- younger and younger -- more like fifty something, and lately, sometimes in her late-forties.

Is this looking younger thing her idea? It's confusing. She doesn't look like a woman who needs Boniva. It's as if she's showing would be directors, producers, agents that Sally Field still has the looks, the vitality of a film's leading lady.

Hey Sally, I love your work as an actress. But the moment a Boniva ad appears with you in it -- I don't know why -- but lickety-split, I change the channel.
Posted by em's talkery at 4:00 AM

I like Sally Field too. But I think that any woman of a certain age who is very thin can make me think of bone frailty. I don't associate it just with the very old.

Ha! Sally has NEVER looked her age. NEVER..I have always thought that she was adorable and a very fine actress.

I take Boniva and I know it doesn't make me agile enough to skip rope. I guess I get a bit turned off as well, but not enough to change the channel.

Now those people who stopped smoking with Chantix),they REALLY get to me. When they are on, I immediately turn the sound off! ;-)

i love sally and also turn off the boniva ads. i don't know why i dislike the ads. even tho i mute most ads, i watch some cute ones. i have no problem with boniva. i think it's the way sally seems so "chirpy" that turns me off. kind of fake. but then, it is an ad.