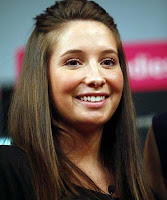 This pretty girl is like a melody, and she's got the whole world in her hands.

Why? Because Mom is a possible presidential candidate, celebrity, and author. Doors open -- you have a better chance than most people, if you've got a famous parent.

Bristol Palin is making money promoting abstinence. According to Daily Beast reporter, Duff McDonald, she's making around $100,000 this year from The Candie's Foundation. For promoting teenage abstinence, this foundation pays her $15,000 to $30,000 for each speech she makes, and she's made more than a half-dozen this year.

And Bristol Palin's got things to sell -- albums of photos of her, including her now defunct wedding and her Dancing With the Stars' stint. Her autobiography will be published in June. There's already a pre-order list on Amazon.com.

Since Mama Bear's memoir, "Going Rogue," sold more than 2.6 million copies, Daily Beast's McDonald predicts that if daughter Bristol's autobiography sells only 5 percent of that, it will gross about $3.25 million for William Morrow & Company, which is also her mother's publisher.

Even though Bristol's days as a teenager promoting abstinence are ending, she'll be earning about $100,000 from an FM station. Arizona's "Mix 96.9" is hiring her to play her own songs and speeches, and her mom's.

Her newly formed public relations company, BSMP, (20-year- old Bristol Sheeran Marie Palin is the company's star attraction), is handling all her personal and professional appearances, interviews, and endorsements. The Daily Beast estimates that BSMP will gross $250,000 for Bristol.

Thanks to ABC News promotion of her on Dancing With The Stars, and her mother's pals, who kept voting and voting for her to stay on the show, Bristol Palin's take from DWTS was approximately $2.5 million.

Her successful acting debut last summer in "The Secret Life of an American Teenager" will undoubtedly lead to more jobs as an actress/performer. Meanwhile, BSMP has applied for a trademark on her name, so, more than likely, there's going to be Bristol Palin ® beauty products and clothing.

Daily Beast reporter, Duff McDonald, a contributing editor for Fortune Magazine and published author himself, estimates Bristol Palin's earnings by the end of this year will be $6.2 million.

I've auditioned and hired many dancers and actors, and know how to evaluate dancing, acting, and performing talent.

This picture sums up for me, Bristol Palin's problem. Mom's face, features, and figure are interesting, and more than averagely attractive. Mom is exciting. Bristol is not.

If I were Bristol, I'd get rid of this picture, which shows her freely expressing herself in movement. That open-mouthed expression on her face is not attractive. The pose is awkward-looking -- she looks clumsy, and her legs are thick, (just a peep at what's above her knees suggests fleshy, out-of-shape thighs. Her waist (emphasized ineptly by a white belt), looks thick.

I would NOT hire her to inspire women and girls or the opposite sex. She's a nice-looking, ordinary young woman who looks "housewifey" pleasant. Bristol Palin isn't someone I'd ever buy a ticket to see or buy a book to find out how she got to be what she is.

Ugggggggggghhhhhhhhhhhhhh....at least that bubble head. Kim Kardashian is beautiful, despite her enormous posterior.

Bristol, go back to Alaska and try to see if you can see Russia from your window.

An out of wedlock mother, who is a Poster Child for Teen Abstinence with no talent, average looks and zero personality, does not a star make!

It's sad commentary in this economic downturn that someone who barely finished high school and frankly has not an iota of talent can make six figures. Anyone foolish enough to pay this cow (sorry, but she really does look like a cow) to talk about abstinence, in light of being a teenage mother and even talking about having another child, is totally insane. For such a young woman, she has the figure of a middle-aged matron, and is uttering lacking in charm.

But then I don't believe her mother has charm either, but she's sexy and used her sexual allure to campaign in a very seductive manner. In fact, she does everything seductively. And although I don't respect it, it is unfortunate for the daughter that she is totally lacking in this quality.