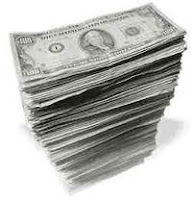 We are being told by the Republicans that problems are smaller than they are. Politicians and Congressmen, like helpful salespeople, are saying we can fix the deficit by cutting things from the budget.

And having been told this over and over, most Americans and Congress think the federal deficit is the number-one problem that must be addressed now.

I say it isn't. But 7 out of 10 Americans, according to the Gallup Polls, say it is.

And THIS is what Congress is working on? Nope. It seems to be "PRETEND TIME."

Republicans lunch with the President and emerge talking of "common ground" and, smiling happily, say "We need to send a signal that we are serious about cutting spending."

"SIGNAL?" A beep-beep? A green light? Well, maybe with their "Yay team!" stuff, they've been sending the "SIGNAL," but I don't see or hear anything but noise.

What actually is going to be cut? And is the amount $100 billion? Even the amount, has been fudged.

President Obama proposed a budget that ultimately addresses the deficit. His budget adds $7 trillion to the deficit over the next decade, rather than $8 trillion.

Note the word "ultimately." Eventually, after 10 years, the debt might be $1 trillion less. Well, at least it sounds okay.

Actually I can't picture $1 trillion, but I don't know why I have to bother. Nothing is happening.

Everyone says NO to cutting antipoverty programs or education supports. What about cutting "unemployment payments to jobless millionaires?" Or cutting all waste, fraud and abuse; all foreign aid; Air Force One; all congressional pensions?

Hey guys, c'mon -- unless Congress cuts Medicare, Medicaid, Social Security and defense, we are NOT going to be able to cut the deficit by anything approaching what they're sort of fudgingly, more or less talking about.

If you believe that low taxes promote strong growth -- okay, enjoy it, but be prepared to put some of your money into cancer research, paying for the music classes your kids' school canceled, and contributing money to take care of the men and women who come home from the wars they've fought to protect us.

Despite all the former great American presidents (starting with Jefferson) who have said the federal deficit must be reduced and paid -- yes -- I'm saying again, don't fix the deficit now.

Times have changed. It used to be major, number one, significant, important not to pass federal deficit onto the next generation.

Right now we have urgent, life and death problems we are neglecting in order to figure out how to handle the deficit.

Congress, Republicans, Democrats -- people -- we have get to work on those life and death problems. We can't fix/solve/ or pay off the national debt right now.

Any time anyone of the politicians start talking in terms of trillions, my father (a dyed in the wool conservative, but aware of crooks on all sides) says "What's a trillion? That doesn't mean anything to me."

For me it's looking at a lot of glad-handing, broken promised land gluttons who will do or say whatever it takes to stay at the top. Never mind that a single day spent NOT fighting in Iraq would pay for pretty much all the programs they want to cut.

Well said, unfortunately, they all must run for election at some point so there's lots of pandering going on for the voters to approve of what they say their going to do. People rarely check to see what really happened.
The cuts proposed are all cuts that effect the average taxpayer and their are no cuts or tax loop holes for Corporations discussed. The fraud that was committed against the American people by financial institutions remains, nothing has been changed. It will happen again unless there is financial reform to close the loop holes. Yes, new loop holes will appear eventually, but when you have carpenter ants in your house, you get rid of them before renovating you don't just continue hoping that they'll change their life style of eating your home. The discrepancy between the percentages $1 for $1 between Corporations tax share paid and the average taxpayer could use some adjustment, nothing has changed in this regard for many, many years. So there are many things that could make a difference in our ability as a country to grow and invest without cutting programs that serve people during these troubling times. Just my take on it. xxxooo H.

Em...I have been disabled since 1985 with a serious progressive neuromuscular disease. I worked for 26 years as a commerical interior designer and for 15 years before that as a child actress.

The money that pays for Social Security and Medicare, do not come out of the Government's spending budget. They are paid for by all who work, in the form of FICA tax.

To threaten to either cut these programs or eliminate them entirely, is simply heartless and unthinkable. For one thing, they do not make one iota of difference in what the government spends....

I shutter to think where I, a 68 year old woman who is severly disabled would end up if these programs did not exist. Probably dead, as it would be a choice of that or living on the street, where I might survive for a few hours at best any way.

Stop all of the surplus pork that gets thrown into these budgets! Stop all of the criminal hands that are in the till! Stop giving tax cuts to people who could survive quite well with out additional tax cuts!

Stop funding senseless wars that do nothing but destroy lives and make rich billionaires even richer!

What I don't understand is how suddenly millions of people care about our deficits. Nobody seemed to back in the early Iraq war years. Serious people have been trying for years to get voters to pay attention to the upcoming entitlement debacle, and nobody cared.