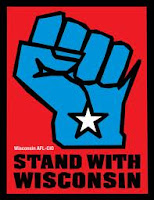 What this Scott Walker is winning is a place for himself as a "name" in politics.

His "name" means turn back the clock. He got the bill passed that he wanted to get passed. The media called what he did a Coup''D'Etat. '

By severing the financial part of the bill Wisconsin just passed (which couldn't be passed without absent Democrats) from the part eliminating the collective bargaining rights of public employees, Wisconsin Republicans have made it crystal clear that their goal has had nothing whatever to do with the state budget. The goal is to bust the unions.

That's no surprise to most of us who have watched this conflict from the start, but like any coup d'etat, its ultimate outcome will depend on the public. If most citizens of Wisconsin are now convinced that Walker and his cohorts are extremists, willing to go to any lengths for their big-business patrons (including the billionaire Koch brothers), those citizens will recall enough Republican senators to right this wrong.

But it's critically important at this stage that Walker's opponents maintain the self-discipline they have shown until this point. Governor Walker would like disorder to break out in Madison. Like the leader of any coup d'etat, he wants to show the public his strong-arm methods are made necessary by adversaries whose behavior can be characterized by the media as even more extreme.

We have to remember, we are a nation of laws, and those laws prevail. The "People's Party" (that's what the media calls Walker's supporters), is growing across America and the actions of Scott Walker and his Republican colleagues are giving it even greater momentum.

Similarly, the actions of congressional Republicans in D. C, are using the threat of a government shutdown to strong-arm their way in Washington.

The American public may be divided over many things, but we stand united behind our democratic process and the rule of law. We reject coups in whatever form they occur.

What does this mean to you and me? .

It means do nothing. there's nothing to do yet. But I foresee this as a new sort of Tea Party-ish collection of angry people, who are anti-Obama, who want him out of the White House, who want to win the next election. Nothing is happening in Boehner's Congress except talk-talk about cutting the financial debt, talk-talk about keeping the Bush Tax Cuts (for the rich), which, in fact, created most of debt.

We should be broadcasting on loudspeakers the truth about this -- IF the Bush Tax cuts are vetoed, we would not be arguing, negotiating, talk-talking about billions of cuts in programs like social security, unemployment insurance, Medicare, education ... on goes the list of what the Republicans have said they want to cut.

So I'm just listing things because I don't know what else to do. I feel stuck. I'm frustrated, and frightened at the thought that the progress that has been made, progress that makes it possible for average Americans to live a good life in our country, is now threatened by Walker's personal push for fame, glory, and power.

Will Walker run for President with Palin? Or get hooked on as VP for Romney? Will Huckabee grab him?

Sit tight folks, hang on, and pray that the courts, the laws of the land will find a way to stop Governor Scott Walker from infecting others -- other states, other governors, other people with this -- whatever it is -- that has him destroying what America means to me.
Posted by em's talkery at 4:00 AM

The wonderful thing about this is that he has awakened the sleeping giant - true liberals & unions!!

I bet he is hoping to take the vice presidential nomination.

Agree with Kent's comment.
This is nothing new in the history of politics good to see large numbers of
people reacting in a productive, concerned manner. People are seeing the imbalance between Corporate influence and power over our individual rights and government policy. Wisconsin, is just one state and there are others, this is not the end of protest of Corporation (all corporations) manipulation and influence on policy making for self-interests. This is an issue that is activating, bring all American people together because it's about their survival and the survival of America as we know it. xxxxoooo H.