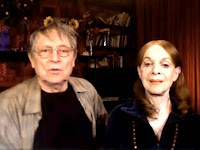 Emily Frankel is amazed that John Cullum is not a worrier. She wonders if it has something to do with the way he was brought up.

He sings "Lazybones!" And reveals it is a lazybones sort of thing. He just can't worry, even before an opening when the pressure is on him. He just isn't worried.

Cullum's extensive preliminary work on learning a part -- any part -- even if it's just a reading, or preparing for an audition for a commercial, or a part he isn't enormously interesting in playing -- means he digs in, studies the lines, reads anything that comes to his mind, that might shed light on the character.

Emily admires him for it.

Envy. Great word... Such a difference from jealousy! Thanks for this...

Amazing how JC can stay so calm...Loved the part where you called the prez of Equity!

Me, I worry over every little stupid thing...but rarely worry about big things that effect me personally...friends yes...I am ALWAYS worried about my friends!

I used to be (self diagnosed) OCD about things like did I lock the door...that was back in NYC where I had 12 locks on my door...(mildly exaggerating)....not so now...I guess I am cured of my temporary OCD!

I am the worrier in my family; my husband doesn't worry. Sometimes he loses sleep when he is anxious about something, but he isn't conscious of being anxious.