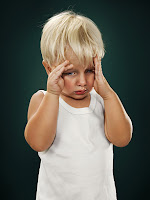 Does this child have a headache? The caption says "Depression is not just for grownups. Scientists are discovering that infants and toddlers can develop some very adult mental illnesses.

Infants with adult illnesses? Is this something newly formulated, being studied, researched by the scientific psychiatric guys --the psychiatrists, psychologists, psychoanalysts? Have they expanded the concepts of mental illnesses that somehow, lately, annoyingly are in a huge cooking a pot called "bipolar disorders?"

When I Google "neurosis" or "depression," I get detailed descriptions, and references, to articles such as "How to be happy." (On Answer.com I got "How to eat a Reese's Peanut Butter Cup.") I also got links to "mental health," and "emotional security."

An article in Time Magazine explains how a parent's depression affects the genome, which is your cells -- your DNA. We are born with our own genetic predispositions to the whole panoply of adult woes and illnesses in our genome, when we're in the womb.

According to the nonprofit child advocacy group, Zero to Three, a baby's brain is more fragile but much like an adults. Mental illnesses, such as defiance, aggression, attention deficit disorders, post-traumatic stress disorder (PTSD), social-anxiety disorder, major depression, insomnia, even the illness of prolonged bereavement -- Dr. Robert Emde, an emeritus Professor of Psychiatry at the University of Colorado School of Medicine says, "All these disorders which we see in adulthood, have antecedents in childhood."

The latest diagnostic-classification manual, published and updated in 2000, the "DSM-IV-TR" Fourth Edition, which was developed and revised from the first diagnostic and statistical pamphlet of 1952, confirms this disturbing news.

Furthermore, Dr. Emde and his staff say that experiments with preschoolers diagnosed with anxiety conditions -- kids from orphanages and broken homes -- show that ch 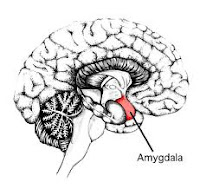 ronic stress has an impact on the brain.

Here's a new big word -- Amygdalae. In the picture an Amygdala looks like a small red potato. They govern emotions such as fear and alarm, and grow larger; there are more of them found in abused children.

Dr. Emde notes that the tested children were still impaired by it four years later. "Children with preschool depression were six times likelier than other kids to have the condition later in childhood. "The nature of psychiatric conditions is that they're chronic."

Stop, stop -- I'm yelling louder -- you know where this is heading!

Remember the Salem Witch Trials. Children imitate adults. They get their ideas and feelings from adults. Adults are creating this.

What we need to do is pay attention -- listen, observe, and with tender, intuitive, careful observation, give full-out loving attention to our little ones before we see the little ones in pain -- before the child starts holding his head.
Posted by em's talkery at 4:00 AM