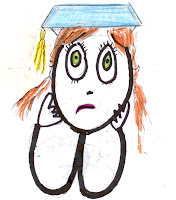 It means something is hanging over us -- we have to keep watchful eyes on whether the situation in Fukushima worsens or improves.
Posted by em's talkery at 4:00 AM

But will they tell us the truth?

Em, Linda,Llife is a risk, there are good, intelligent people working to solve these problems, I wouldn't know how to solve this problem if my life depended on it. 'Telling the truth', who knows, I want the truth if it helps me cope with a situation. Great topic Em! xxxxoooo Heather