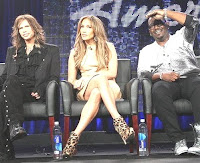 I have to admit that right now, my hoping, praying, wondering about the real world is distracting me from who's going to be the number one anything in show biz.
Posted by em's talkery at 4:00 AM

I don't really watch the whole program anymore. I speed through much of it now that I know what each contestant is about. I used to just speed through the commercials. My heart goes to this panel of judges. I get that they're dear and on the side of the performers. I enjoyed that they're thrown when the public doesn't bother coming out for a brilliant performer. In past years I could almost bet that each season the # 2 winner was the real STAR of the season. I forgot the #1s almost instantly. I only began watching because my friend Sue Matsuki's is friends with Katherine McPhee's mother. We now know Katherine's lovely sister from Salon and other venues. I miss Simon Cowell, because, to me, he's one of the hottest, "funnest" guys to watch. In terms of nurturing these talented young performers, I think the three judges that are on now are excellent.

By the way, have you seen the videos that have lately been emailed around - of the very young singer and dancer from Britain's Got Talent? OMG!