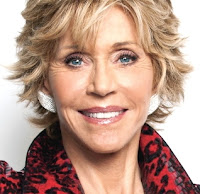 Pretty soon we won't know what people look like at 70. Weirdly, she looks king of more like Carol Burnett now.

Dear Emily: great blog today about Jane Fonda! She was my hero along with Carol Burnett for many years. But, because of the face lift surgery I don't put them as high up on the ladder anymore. It's like Jane feared growing old and looking her age along with the rest of us. It has changed her whole outlook and expression of one's NATURAL self and I would have loved her more even with her wrinkles. She may be a "doer" but she is a follower not a leader now-doing what so many stars are doing-plastic surgery to keep alive forever.
Now, Em if you want to get a face lift-it's OK with me...I will love you if you age naturally and gracefully or with a surgeon's help look 20 years younger than me. YOU'RE BEAUTIFUL either way! kam Kathleen Ann McGee

It's too bad, but that's Jane Fonda. I always enjoyed her skin care advice, her exercise programs, and her life and development in general, but I always understood that she had certain values that differ from mine. She hasn't completely shaken off that early self. But then do any of us ever completely shake off our early selves?

If she has done it to get more parts...then okay..I can understand that.

Personally, I appreciate looking at an aging face that is aging normally and gracefully.

You dearest Em, have a face that is natural and beautiful. You know that you would never touch it and there is absolutely no need to. You are a beautiful woman.

Jane Fonda has always been very insecure. I hope it makes her happier to have a new face and gives her more security.

To me security is something that you build from within and not from the outside.