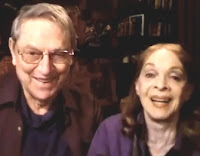 I think reproduction and childbirth would be interesting for them.

Everything else would be antiquated. I believe they are far more advanced then us. They will look at us as we look at silent b & w films.

But I feel they would observe us and wish to 'fix' us, but know they cannot alter our timeline.

Perhaps they would wonder about our tattoos and hair.

Lol! What a great blog today about aliens visiting earth. I really enjoyed John's onstage appearance of an alien during a play. He handled this very well. It reminds me of the classic movie "The Day the Earth Stood STill" with Patrica Oneal or E.T. Thanks for sharing a lovely video! kam

Wow! That was some story. John is so cool. What a pro! (Like we didn't already know that!)

EM & JOHN, how delightful this blog video came out! Reminds me of something I learned in a weekly Bible class....the preacher led it, he was a fabulous teacher, he welcomed questions, & comments & often they would come up. After that 'track' was followed, he'd say, well we got off on the 'rabbit trail' & then he'd bring it back to where the lesson material left off & begin from there again.
* * *
So the 'aliens' subject went on the 'rabbit trail' & then John's play experience also took him on the 'rabbit trail'. It all turned out FINE, just FINE as we all loved following along with it.
* * *
I hope to discuss 'aliens' a little more as time & your blog may reveal that. Literally, I truly believe there are 'angels' among us at times...so always a possibility that literally there may be some 'aliens' among us too.
* * *
Luv to you both. I'm @grammakaye on twitter.