TO BE OR NOT TO BE ALONE 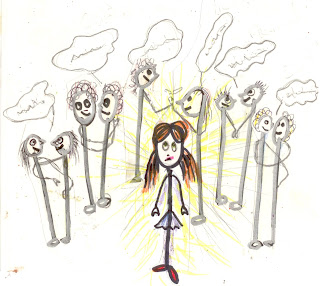 Am I alone? NO. But often I feel very alone. I have things on my mind that I don't share with anyone because the thoughts aren't clear.

Sometimes when I feel lonely I sing, "None but the Lonely Heart," teasing my husband when he's deeply involved in watching sports.

Lately, I've seen quite a few articles on people living alone. Attitudes toward marriage and family have changed. Maybe it's a trend.

A recent front-page New York Times article says more than half of births to mothers under age 30 now occur out of wedlock. The article examines whether we are casting aside the institution of marriage, and the idea that children should be raised in stable two-parent families.

I've seen numbers in Time, Newsweek, and the NY Times -- today, out-of-wedlock births account for 73% of births among blacks, 53% among Latinos and 29% among whites. Economics plays a role -- it is harder for working-class men to get good jobs, making them marginally less marriageable. It is easier, on the other hand, for working-class women to get employment, making them marginally less dependent on men.

Maybe all this affects you. You're looking for a partner. You feel isolated from the people in your neighborhood. You're very lonely. But I have a son and a husband and we're a family. None of this explains why I sing these words: "None but the Lonely Heart, Can Know My Sadness,
Alone and Parted, Far from Joy and Gladness."

I sing it because I know that I am alone, a lone, single being, and singing about loneliness, is rueful, amusing, and cheers me up.

Yes! Sure, of course, I share many, many doings and thoughts with my husband -- about our son, about our home, finances, possessions, and pending things that have to do with his work and my work. But we are separate beings. 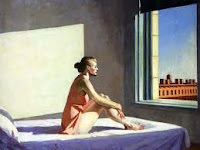 Wyeth portrayed aloneness as did Hopper in a way that we understand.

Wise men whom I admire, Thomas Wolfe, for instance, said: "The whole conviction of my life now rests upon the belief that loneliness, far from being a rare and curious phenomenon, is the central and inevitable fact of human existence."

Orson Welles said: "We're born alone, we live alone, we die alone. Only through our love and friendship can we create the illusion for the moment that we're not alone."

This is my favorite quote from a favorite poet philosopher, Khahil Gibran: "Love one another but make not a bond of love. Let it rather be a moving sea between the shores of your souls."

Here a great song to sing, by Stephen Sondheim.

I am not alone, never have been. We are born in the arms of our mother and die in the arms of Jesus. You can always use your imagination and dreams to feel less lonely. I also have a little dog and cat that keep me in constant company and are entertaining and loving. If you think positive, you're never alone. kam

Singing is creating. That is what beings do. YOU do not have to have an audience. But in the universe, the highest purpose is the creation of an effect. Without another person, you can't create an effect (like when John watches sports :-)

I effectively withdrew from any relationships other than those of solidarity in activism and the family of friends I live with. This society and world seem increasingly strange and estranging to me; the thought of dying and losing it is not at all disagreeable. It is obviously in danger of being killed through human stupidity, both active and passive. Loneliness is an understatement.

I definitely feel alone, even though I am not alone. I don't open up about most of the thoughts in my head--don't know why.

I have always really liked living alone. Maybe it comes from having been an only child. I have been married and I have lived with boyfriends. Personally, I really like living alone best.

Lonely is a state of mind. It has often been said that you can be in a crowd of people; friends, family, et al and still be alone or lonely. I feel this sentiment is more true than any other homily out there.

But societal paradigms frown on those who enjoy or seek out the feeling of being alone. "No man is an island," is just one of the finger waving bon mots that indicate being alone is not a good thing.

I was in a marriage that lasted almost thirty years, twenty of which I spent feeling almost entirely alone. If it had not been for our daughter, I would have been alone full stop. But I stayed because I wanted our daughter to feel the presence of a two parent family. Was this a good idea? I hope so, although the lesson learned by both of us (my daughter and I) was a harsh one and it has left scars that may never heal.

All the above paragraph is a long winded way of saying I can well understand why the percentages of unwed single mothers is on the rise. I may be giving them credit where it is not deserved, but I feel they have learned that is it okay to be a lone parent. Being part of a "nuclear family" does not ensure well rounded children.

I have always felt comfortable with my own company. My daughter takes after me in this respect. It is, I think, a healthy way to feel. Yes I do get lonely sometimes, even when surrounded by those who like and enjoy my company. But as I said in the first line, lonely is a state of mind and not a state of being.

We are indeed alone for the shell of humanity is not the person I knew as my mother, for when I looked in the casket on the day of her death, I did not see "my mother." Today I can have that only in the imagination of my own mind. While our love is undying, I'd do anything for another 15 minutes of conversation on earth. I know nothing of God except the imagination of him and the fact that I cannot believe my existence is just click work. So yes, in my estimation we are all alone as you say. Singular beings often left alone to scour the confines of our own minds; our dreams, loves, fears, ambitions and insecurities. So much we shall take to the grave that our closest companions may never know. And if God, or Jesus exists as we believe they do then our souls will be judge individually in that moment, and our damnation or salvation can only be up to us. For not even a mother who carried us and held us to her bosom can save us from the verdict of God's ruling.

"Alone" & "Lonely" are in fact two separate states of being for me. They have converged together at certain times in my life, but even then they are still two, not one.
* * *
"Lonely" ~ I perceive as 'negative' as in a longing for a connection or connections that at the time I didn't think presently existed in my life and the feeling of lacking something because of it.
* * *
"Alone" ~ I perceive as 'positive' as in my time (me time) to ponder, explore, re-charge, do what I want as an individual entity.
* * *
"Singing" ~ in my particular case whether it comes from a certain Celtic gene or my French haywire gene or the environments of my upbringing I do not know ~ I use singing as a purifying soul cleanser. It helps push out and away especially what I perceive to be negative things like lonely, pain, heartbreak. It's really quite a transformative way of coping for me.
* * *
I was raised in Faith that tells us we are never truly 'alone'. I have had times both in my 'alone' and 'lonely' where I did feel the presence of not being 'alone'. However there were and are other times where I felt no presence with me. I don't know how to fathom or what to make of that.
* * *
Much love to you Ms. Emily and your John Cullum & FAMILY. I'm @grammakaye on twitter.

Being alone is definitely a good thing for the soul. It helps us reflect on our lives, our world, and our dreams. Blessed with a beautiful family, I sometimes sit outside and become one with nature. I turn off all the clutter in my brain and just be. Nothing but birds and wind and the occasional lizard popping by.

Given a choice for solitary or togetherness, I much prefer the latter. Some folks seem to relish in their singularity and others flounder. Having seen both worlds, I treasure them for different reasons.

Being alone does not necessarily mean without others. It can be a state of mind. Be wherever you feel comforted. Even if for just a moment.

Every one of us is alone from the moment they pop you on the butt and cut the umbilical cord.

We spend a lifetime looking for comfort and closeness. We're led to over expect by happily-ever-after fairytales and love stories with beautiful endings; then we get mad at our mates because they don't live up to our expectations.

When I get lonely I go outside, or to the workshop, and do something with my hands that I enjoy doing. It might be pruning tomato plants, changing a lawn mower blade, or straightening up in the workshop, but the satisfaction of having done something well makes me forget about being lonely.

Interesting topic as usual Em―keep up the good work.