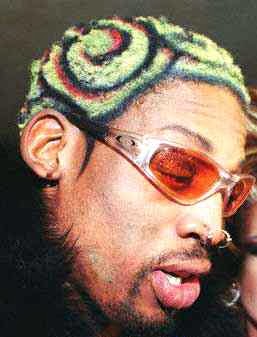 Rodman's many impressive sports awards have faded into sports history, but his outlandish behavior continues to make headlines. He's been visiting North Korea and palling around with it's young Supreme Ruler.

Supreme Ruler Kim Jong-Un -- greed, anger, petulance is what I see in his face. He's 31, carrying on the despotic

traditions of his father, living in luxury while his people live like slaves in shocking poverty, and blatantly developing atomic weapons.

Yes -- North Korea has become a threat like Iran. At least right now, Iran is talking with us, but Kim Jong-Un continues, despite UN sanctions, to test bigger, long-range atomic weapons.

Rodman, famous, outrageous sports hero, now 52, was, once upon a time, a poor kid who grew up wandering the streets, had no home, or parents to protect and watch over him, and teach him right from wrong.

Just recently, Rodman raised the money and brought a bunch of famous athletes with him to North Korea to celebrate and sing "Happy Birthday" to Kim Jong-Un.

Okay. Rodman doesn't sing very well, but he is certainly connecting with this dangerous young ruler, making himself Kim's best buddy, a celebrity pal whom Kim is obviously thrilled to have aournd.

Rodman's outlandish, and unpredictable, but gee, he's made himself what our country NEEDS -- a beloved ambassador to North Korea, an Uncle .whom Kim Jong-Un hero-worships and won't want to destroy.

Yay hurray, for Dennis Rodman!
Posted by em's talkery at 4:00 AM

At first I thought Dennis Rodman's outreach to North Korea was a good thing, but as I read more about it, I am not so sure.

OH no, say it ain't so. Em, I can't believe you gave Rodman a "hurray" !?! Within days of his last visit to visit his ole pal Mr Jong-Un, Rodman AGAIN checked himself into rehab. Kudos to Rodman for recognizing that his alcoholism was out of control DURING his latest visit to North Korea. Even HIS own agent, Darren Prince, reported he (Rodman) had been drinking heavily and to an extent "that none of us had seen before." I truly feel sorry for Mr. Rodman, as his disease has controlled his life for many years. When back to sucking down the booze, the man is obviously a real problem, to himself and to those around him. This is evidenced by his repeated appearances in courts throughout the land. for DUI's, domestic abuse charges- (ON MORE THAN ONE OCCASION) and other such ugly "stuff". If his own agent says that Rodman was out of control to an extent that he had never seen before- at the same time as acting as the self-appointed pseudo ambassador while IN North Korea- THAT is scary. Sorry Em, we must agree to disagree on this one. As always, I sincerely appreciate your uniquely "Em", brain cell engaging, perspective. THANK YOU for that! Can't wait to see what you have for us next.

Iran is talking to us? Are you seriously thinking that they're all of a sudden going to be our buddies? North Korea, and Iran, along with several other countries, would like nothing better than to see the U.S. wiped off the face of this planet. Glory hounds like Rodman are just trying to be in the public eye, no matter what the cost. I find it hard to believe that anyone would approve of his actions. The people of North Korea are probably thinking that this is just another stupid American, and that really turns my stomach!