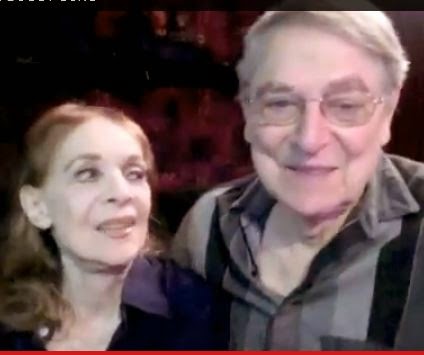 Emily, praising and raving about John's singing, wants to know when and how John developed his baritone voice.

John reveals what he did at age 9, because he loved singing and was too shy to perform a song in front of a roomful of relatives.

When Lerner's assistant discovered him, and Alan Lerner asked him to sing --  and he didn't sing well -- he was hired as understudy, standby for Richard Burton and Roddy McDowall. That inspired John to start studying with Seymour Osborne, the renown theatrical vocal coach whom Alan recommended.

Em, you and John are fascinating....BRAVO!

Love John's candor and your interactions with him, Em. My mom was the musical force in my family. One of her favorite tunes was "How Much is that Doggie in the Window," which John's "Doggie" tune reminded me of it. Thanks for the memories and a glimpse into your wonderful relationship with your husband.

What a sweet and lovely video. I adore John's voice. "Come Back to Me" from "On a Clear Day" always gives me chills.

John Cullum, the most wonderful Broadway voice that simply does not exist anymore. How I miss the Rogers and Hammerstein, Lerner and Lowe musicals. Oh, and the songs from Shenandoah. John's voice soared in that show. Nothing to bring me to NYC for Broadway anymore.

What wonderful memories the two of you have. It reminds me of myself when I was young and painfully shy even though I loved singing. Both my parents were singers and they met while doing shows in high school. My mother did radio shows in the 40s and my dad was even singled out by a theater critic in L.A. when he sang in a show at the Wilshire Ebell Auditorium. There was always music in our house and I had always wished that my parents had gone on to do something with it but for many years, they lived vicariously through me. Cheers, Stephan

YES! There is hope for me yet? I just need to meet up with that Russian vocal coach and I too can belt them out like John? Uh..I wish! John is being far too humble. As Pamela said above, John didn't "just sing" in Shenandoah..his voice soared. Same holds true for all his work, all across the stages of Broadway, off-Broadway and movie sets. It is proven, John is a very talented man, married to a very talented woman, with a very talented son. Without getting all "mushy", one of the best offerings of these A.I.R. vignettes is being able to ACTUALLY feel the "realness" these two love birds unabashedly hold for each other...without doubt, their greatest "time tested" accomplishment they graciously share with us. Nice way to start the day! Thx Em.