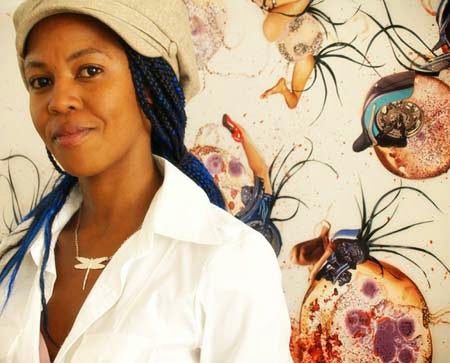 I saw a picture of a painting that I liked. Then, this picture of Wangechi Mutu, an artist and sculptor who lives and works in Brooklyn, New York.

Right off the bat, a biography appeared and said, "She is considered by many critics to be one of the most important contemporary African artists of recent years. Her art works have. achieved considerable global acclaim."

I started looking at photos of different things she created, and a video. There were lots of things to click. No doubt about it, this artist's credits tell you not only where she's exhibited, but loud and clear, say that the high and mighty folks in the art world are very impressed with her.

I wanted to see her art, not read her life history, so I skimmed. Age 41, born in Kenya, she sensed (she herself explained this in one of the videos) that before she was in her teens, she knew that she was going to be an artist, and she focused on becoming an artist in grade school -- it was a goal as she pursued her education.

It reminded me of me, (and what kids with show biz dreams do). This gal created an instrument -- body and soul -- that could do whatever she might want it to do -- draw, paint, sculpt, build, construct, photograph, record, and film. How did she know what to do? She grabbed whatever she saw that interested her -- that's what Wangechi did -- and she herself says, that's what she still does.

In her late teens she got herself educated in the World College in Wales. In her early twenties, she moved to New York City, where she studied at the New School for Social Research, Cooper Union, and Yale.

Her work speaks to me -- images floating on reality, juxtaposition of dream-like visions and beautiful rendered, detailed,  exquisitely detailed reality.

What Wangechi Mutu  says about herself as we look at her work, is a trip into another America -- our world seen by a woman with eyes that see truth, beauty, evil, life and death in her own, very special, different way.

The vision of the artist here is especially interesting -- think of this nine minute video as a visit to a museum of art, where you can spend a little or as much time with Wangechi as you feel like spending.

Frustrated. Why can I not take my "visual, creative DNA" and too "catapult it outside of myself" as Ms.Mutu so describes her accomplishment in her art work? I want to. I want to really bad. But , I was born a "numbers guy" - but one who has a high appreciation for creativity, Yet, my abilities to be creative seems to be limited to the cognitive and deliberate. Em, you are unique in that I see your creativity as cognitive and deliberate- with your writings and yet you among the elite of dancers- allowing you to express and create on a spontaneous and emotional level. With that, I think you "get" Ms. Mutu's talent and what it produces as your spontaneous and emotional traits "kick in", all while I need to sit and think, and then, sit and think some more to try to "figure it out". Only through the artists words was I able to "short cut" to finding out what was the worthy achievement or intent. It was a great watch and read with my Saturday morning coffee AND, even though I am left with feelings of frustration,admittedly IT IS a good kind of frustration. Just as most of your pieces do, you have taken me outside my box and challenged me in your usual spirited and charming manner Em. Thank you.

Em, I am breathless and amazed at this young lady's talent....WOW!

I am in awe of her talent. Yet something about her work disturbs me. It's beautiful, but also it scares me in part. There is a lot of Dali in it, but clearly much more feminine.
I applaud her enormous talent. One minute I find it beautiful and the next it is more than I want to see, because it disturbs me and I can't say just why.
In any event she has an enormous multi talent. Maybe I am just too old school to want to accept those hanging bags filled with garbage and to find them attractive. Yet there is no doubt that her work is truly brilliant.