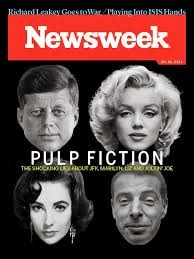 Welcome back to my mail box Newsweek Magazine -- I missed you since you and the "Daily Beast" stopped the printed issue in October 2012, and became an online magazine.

Happy day -- my new Newsweek, with JFK, Marilyn, Liz, and DiMaggio on the cover, immediately intrigued me. I dove into the cover story, expecting ... well, at least some interesting revelations about these super celebs.

Nope. The cover story by the reporter focused on bestselling author C. David Heymann's latest book, "Joe and Marilyn, Legends in Love." The magazine's reporter stated that in this book, the author invented shocking intimate details as he described Joe beating up Marilyn, Joe wire-tapping her home, Joe stalking her.

On and on went the cover story, proving that each bestseller by Heymann was chock-full of lies, distortion, and non-facts. 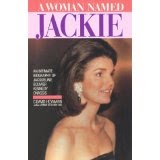 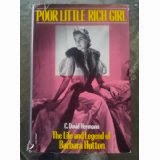 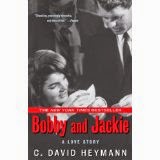 Quoting other celebs, the reporter showed how Heymann's book on Barbara Hutton, "Poor Little Rich Girl," his revelations about Jackie, and JFK, his proof that RFK was her lover in "Bobby and Jackie" were mostly the author's inventions.

Also, according to the reporter, the revelations about Liz's love life were not based on her confiding in Heymann as he claimed -- Heymann's revelations were well-researched rumors. Similarly, his book about Caroline Kennedy and JFK Jr., and Heymann's
his second book about RFK, are page-turners, but the reporter tells the reader, "The facts are not facts." 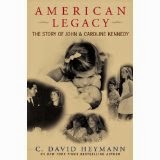 Remember, our admiring these celebrities, wondering about them, learning some right facts and wrong facts about them is fascinating, but like entertainment -- it distracts us from the often boring, ordinariness of our own lives.

Writing a blog requires me to keep in tune with the times, to wonder about things that you and millions of others wonder about. Yes, Newsweek back in print is fun to skim, but I sense, though the title isn't used anymore, the "Daily Beast"  is still behind the scenes -- still specializing in gossip, nasty news, and dirty laundry.

If you want more of this to fill the nooks and crannies of your imaginary love life, you can get the current printed magazine online, or subscribe and get the digital Newsweek on one of your handheld devices. Or buy the books on Amazon. This bestselling author, who died two years ago, made millions on these books, and lives on in these tales he told, full of sound and fury, signifying nothing.

Obviously the "nothing" that was written by the very skilled, very savvy Heymann, is wonderfully absorbing entertainment.

If it hit publication, it had to be true. Best to write about those who have died. They can't sue you or be the ultimate ones to prove you're wrong. Glad to hear the periodical is back in print.