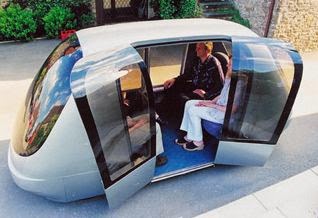 Have you ever ridden in a driverless car? The idea has always seemed unreal, but today, the passengers in that car could be me and my husband.

Some partly "quasi" driverless "autonomous" cars date back to the 1920s and the 1930s. At the 1939 World's Fair, a street intersection in the City of the Future had autonomous cars. Since the 80's, significant advances have been made in technology and autonomous vehicles are being developed by Mercedes-Benz, General Motors, Nissan, Toyota, Audi, Volvo, as well as in Germany, Switzerland, and Google's project farm, in Frisco.

Currently, Google is working on a Toyota Prius that will have neither steering wheel nor pedals -- just  $150,000 in equipment including a $70,000 radar system, with a range finder that enables the vehicle to generate 3D maps that can be combined with other high-resolution maps of the world, and produce data that allow it to drive itself (or utilize computation from remote computer farms in the area.)

The Google test group is composed of ten cars, (six Toyota Prius, one Audi, and three Lexus' -- each car operates with a Google engineer in the passenger seat. They are being tested on San Francisco's steep hairpin turns, city traffic, on the Golden Gate Bridge, and around Lake Tahoe. The cars drive at the speed limit stored on its maps; they maintain their distance from other vehicles using sensors; the group has done over 700,000 accident-free miles. Though Google says it has no immediate plans to manufacture cars, it plans to develop a business which would market the system and the data behind it to automobile manufacturers.

"No immediate plans"-- hah -- that  means it's going to happen very soon.

I think I'd be nervous, traveling in a car without a driver, but this video tells  me it's going to be fun, safer than driving, and very convenient.

While I'm all for the driverless car, I'd really like to see some of the safety features such a car has put into today's car.
We're starting to see some of these features in high end cars, but we need to productize the pieces/parts so that every vehicle has them.
There are many benefits to these systems but the best, by far, is to radically reduce if not eliminate death and injury in automobiles.
I'd love to be able to hop in a driverless car/taxi and sleep/think/write/daydream while I'm safely driven to my destination!

It's hard to believe in it, but I guess it could really work. I need a car that does parallel parking for me.

That car would literally be MY WORST NIGHMARE! For years I would dream of trying to drive a car that I was unable to drive for one reason or another. For example: The car is driving with no one at the wheel and I am franticly trying to get from the back seat to the driver's seat. To me a very obvious dream that I have not had in years.

I wear leg braces. My first pair (almost 30 years ago) had no flexibility and I had to learn to drive with Hand Controls. I absolutely hated using Hand Controls. It made me feel (like my dream) that I had very limited control and I could never acclimate to the idea. Fortunately, I got much more flexible braces and was able to drive the normal way, once again.

BTW, that dream stopped long before I got the leg braces.

Em, Excellent, informative, well researched subject that I'm delighted to know more about and appreciate the work you've done on this subject. I'd like to have a 'driverless car' but like all new things it would take getting use to using it. Love and Hugs, H. XXXXOOOO

Our species has the innate ability to adapt to change through familiarity with any circumstance or variable in their immediate realm of existence. Just don't change the wall paper without alerting the revolutionaries and radicals. They'll be upset if not consulted over the break from the décor they're used to. We are adaptable but resistant to change; people that is, dogs and cats too I guess? I am repeating common knowledge and borrowing from John Lennon a bit too; sure he wouldn't mind. Dustspeck