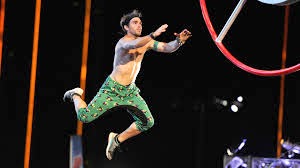 Interesting article but unfortunately cannot see the video in UK

It would be very hard to replicate some of the obstacles for training purposes; so, the competitors have their hands full alright Emily. They are dancing a very hard routine to master but I don't find the fun in the disasters but in the victories of the ones who find their way to the end of each challenge. It's a fair competition that treats the athletes with respect; sort of unusual in that regard as the world of sports goes these days. I say that with a glimmer of hope in my heart that that is true?