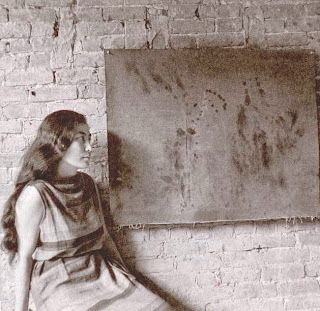 This is Yoko Ono in 1971 at MOMA in New York, and her "Painting To See In The Dark." She posted a sign next to it saying that she'd released five flies on the grounds, and invited guests to track them around New York City.

New York Magazine said, "The work she did at her peak suddenly looks very in step with the culture we inhabit today." 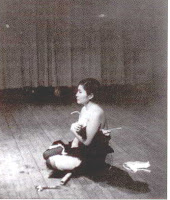 ArtNet.com said, "She was a significant figure in the devElopment of conceptual art. Ono inaugurated her audience participation experiment with works like the self explanatory, "Painting To Be Stepped On."
Describing her "Cut PIIece" for which she sat on the floor and let audience members cut her clothing into shreds, the critic said, "The tricky and brilliantly fearless thing about Ono's art is that it has always directed focus onto the audience embracing even the ugliest  of impulses."

Here's a link to the Yoko Ono. post I wrote in 2013. It continues to pain me -- that her presence in Lennon's life made collaboration amongst the Beatles more difficult and finally impossible. Golly, for us who loved their music, what a loss it was.

Nevertheless, this woman, in her eighties now, has continued to speak out fearlessly on many major issues aside from her "liberation" -- she was blatantly liberated long before it was in vogue. Her paintings, like her music (recordings of her singing songs that she wrote), are avant garde. The words that describe what she was, and still is  artistically, are what I chose not to be, back in my dancing days.

As I write about Ono today, I realize why I don't want to write about her. Ono's success -- what she is now tells me that she has succeeded where I have probably failed.

The New York Times, describing Ono's 1966 "Ceiling Painting" -- that invites viewers to make a climb up a spiral staircase that extends to a skylight -- said, "Near the top, something unnerving happens. The structure wobbles. Just when you thought you were in for a bit of transcendence, you've been given a wakeup poke, a little slap of fear, a reminder that looking for light is perilous. Danger is always near, which is the message that this imaginative, tough-minded artist has been delivering for years." 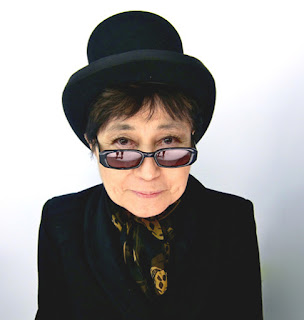 No doubt about it, Yoko was, and still is, a truly creative poetess, musician, woman, communicator and preacher.

I don't want to be inspired by her, but I am.

I don't know enough about her history to guess if she would have achieved fame even if she hadn't married John Lennon.