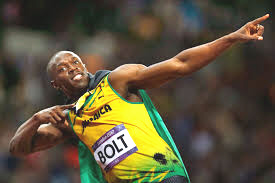 Anyhow, it's fascinating, exciting, marvelous -- to have a "Usain Lighting Bolt" lighting up the sky.
Posted by em's talkery at 4:00 AM

I hope he survives celebrity with his great personality intact

Think it's just something in the water lol

He's the reigning champion in this race. Nobody will do so like him for many years to come I bet.