My paintings live in odd places. The doctor who saved JD's life when he was born has one. My trainer in 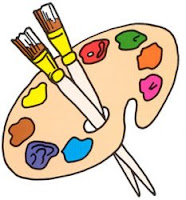 Malibu has one. My mother had two, but after she left the world, her nurse sent them back to me. A psychotherapist whom I consulted when I was crippled has one. I gave one I love to Bethy, who handles our accounts. One is propped against my light, which hangs over this desk, and lights up my keyboard.

Acrylics, layered on like oils, blues, reds, pinks, purples. a swirl of stars like tiny flowers, my vision of a galaxy -- it's leaning against the desk lamp like a bulletin board. I've clipped onto it a typed list of the posts on my blog, Fran/ Sue/JD phone and fax numbers, passwords, set up data, and Earthlink case numbers.

I keep thinking it's time to buy a clipboard, or an easel, but I just clip on more papers. Continue ignoring out-of-date notes taped here and there, on my large, curved, beige Exxon desk, into which my green velvet desk chair (on wheels) is pulled. So I sit a proper distance from my 24 inch monitor and keyboard. With the computer diagonally to my right like a bird's wing, hovering above the surge protector into which everything is plugged. Except the router, which sits on an old mahogany desk (like the desk chair) that JC scrounged, carried upstairs from the street, along with shelves and wastebaskets, that once upon a time belonged to an office of someone who's gone out of business.

Get the picture? I was going to describe my paintings, not my office, but like the paintings, it's like a stage set, every piece, every part expressing, representing a thought, a choice.

Similarly, the hallways. They're the gallery for my paintings -- large, medium, and small New York cityscapes. I enjoy details, daubing in, layering on, doing fine lines, doing with painting what I do when I'm on the phone with a pencil in my hand. I draw intricate flowers, stems, branching into more stems, dividing into thinner ones that turn into twigs, each with a leaf or two, each leaf, with a spine from which capillaries extend to its scalloped edges. The cityscapes were inspired by a photo of the city that I saw in a magazine -- an infinity of buildings above which other buildings hover, behind which smaller buildings peep, all of them with windows. My goodness, sometime I ought to count how many windows. Squares, rectangles, some with oval arches are minutely, delicately calligraphed in the largest cityscape in the hall outside our theater -- it's the city in shades of orange, reds, and gold leaf lacquer, a 3 foot by 5 foot canvas.

Meticulous, ridiculous ! There goes the rhymer in me, rhyming words for the fun of it as I sidle up to describing my clowns. The doorway of JD's room has a door-size girl clown, a

portrait of me done in oils; with felt, montage style giving me a moo-cow's fake eyelashes. Next to the front door there's an 8 x 4 foot clown on it (JC) -- oils, colored glass buttons, and sequins from an old costume. I did the clowns when JD was a toddler, so that when we were in and out of town, the life-size clowns were Mommy and Daddy, always present.

Once, when I was painting a lot, because I was between tours (had no new choreography projects in mind, and writing was daily logs about what to do), a friend brought a gallery owner over from Boston. He studied them, all of them, and said, after hemming and hawing ... "Uh well, they might um ... sell ... but ... "

But he never explained more. Want to buy a fascinating painting? JC in the other room was given, by Paramount pictures, a Canon camera and color printer. (He did a big part "Charlotte's Web" from which he was completely cut.) I told JC that it would be nice to have a picture of my galaxy clipboard ... maybe, one of these days we'll do a blog exhibit.
Posted by em's talkery at 6:01 AM

Email ThisBlogThis!Share to TwitterShare to FacebookShare to Pinterest
Labels: accomplishments, creativity, private self