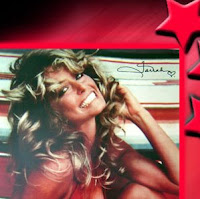 We cheered her, enjoyed the Peeping Tom aspects of the camera work, and peeped at visions of her home, her habits, the glossing over of cancer of the anus. Was it mentioned, or wasn't it? We were hearing so much about a grim cancer of the liver.

Her hair do, famous hair, was the tousled look of it now just the current style, or was it, wasn't it less abundant? Watching the hair, remembering it in a previous scene as we saw the next scene, next phase of her treatment, it was a relief when she bravely shaved it. On tenterhooks we needed that glimpse of her hair, the cap, the blond strands on her forehead. Our eyes, our emotions were focused on that for the next few minutes, next frames, next shots, till we saw blond hair, longer, more of it coming out from her cap.

Her son... A story unto itself, untold except for a few sentences about probation. Wasn't there a reference to him wearing leg chains? Was Ryan O'Neal his father? When did they dissolve their relationship, and why -- from what over-indulgence has handsome Ryan O'Neal become almost unrecognizably puffy, dissolute?

The glimpses of the three "Charlie's Angels" One of them untouched by time. The other older, wiser, somehow damaged by the way her life is unfolding ... It distracted from the question building in our minds -- why insist on returning HOME when trusted doctors say the plane trip endangered her and the healing process?

We did, do admire her for fighting, finding humor... but ...

As doctors gave her bad news -- not cured, cancer cells developing elsewhere -- caught in the theater of the suspenseful plot unfolding, I wanted it to be over. The show ... her life ... My mind was talking to me, interrupting the scene ... "When was this made?" "Is she still alive?" "How will this show end?"

At 10: 44 checking the clock during the commercial, knowing there would be at least two more scenes, I yearned for the story to be over.

Did you sleep well, last night? I didn't. I thought wryly of all the phone calls doctors were going to get, questions they couldn't answer, and would need to avoid.

The show left me feeling sad for Farrah, sad for me, sad for any and all of who know that the elements that create energy, zest, powerful decisive actions are strengthened by NOT dealing with death as a destiny.

Lack of sleep makes me wonder if my logic is slipping. I think, based on my experience with illness, when you're fighting to feel better, trying to heal, you close the door on the fears of failure. Isn't that what Farrah's story was saying?

No. It showed her fighting while she's dying. The dying was stronger, the winner, at the end of the drama. I was left with dying.
Posted by em's talkery at 5:59 AM