Once upon a time, Richard Burton (yep, the real one) had asked me, to accompany Elizabeth T (the real E. Taylor), to a huge party. He was going separately. Her limo picked me up before it picked her up at her hotel.

Of course it had taken hours for me to decide to wear my black organza layered ruffles with its skinny glittering straps. I'd been to galas, where eager beaver photographers rudely leaned over me, and on me, to take pictures of the stars at our table. Someone had tipped them off -- I was not really a "somebody."

When we picked Elizabeth up, she greeted me, "Hi" (yes she really has lavender eyes), and immediately took out her mirror -- during the ride was totally involved with checking her face and hair. We spoke once. She asked if the rouge on one cheek was brighter than the other. I said "yes."

Ahh, but at the party, attention was paid to me. Since I'd arrived with the queen, some of her celebrity-dom must have rubbed off. Maybe they were thinking, "she" (me) must be somebody, because she's Liz's friend.

There's more to this story. My very first book, "Ribet Affair" was about the Burton Taylor romance. (RIB for Richard, the ET for Elizabeth.) I'd told their love story using newspaper headlines, the months of unending fascination of the press, while we (JC and I) were a small unit within the hugely glamorous conglomeration of famous people that were in and out of Burton's dressing rooms during the years that JC was Burton's best buddy. (And I was a very young version of what "Em" is now.) RB liked my blunt, direct, not worshipful, not celebrity-hungry shadow in the background.

This post is NOT about JC and his carousing days, how we outgrew it, and it outgrew us. The famous couple was in our lives for a long time. The last show RB and ET did, "Private Lives," featured JC. And I, as usual, was a shadow at the opening night party -- RB wanted me seated next to him and his new not glamorous wife, Sally Hay, whom everyone was ignoring, so I paid attention to Sally.

Am I beating around the bush, hiding behind B's various wives, before I blab about me and my jewels? Yes!

R had told us all about his buying a 3 million dollar diamond for E. I was at table #1 in Sardi's with RB and wife #2 (Susan Hunt) when she lost one of the fabulous dangling diamond earrings he'd given her. It furthered our friendship when I, dancer-like, crawled under the table and found it.

Yes ... all this affected, still affects me, is part of the sheen on my shell (the protective covering of a gal who's been around -- not a Hollywood expatriate, just a wife of a great-looking guy who's known in show biz).

Em's shell is made of "Project Residue" from ventures as leading lady of a dance company, from being a soloist with symphony orchestras, from making myself the star of a nightclub act, which I created to keep my dancers employed. A tough hard shell of hard work, that almost, not quite, sort of, kind of, perhaps, maybe semi-succeeded, but did not make me a place or a future or a permanent solid footing in the Dance World. 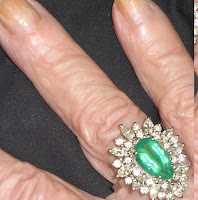 Woo -- ee -- those nightclub act days ... Bought myself an Emerald ring, like the one ET had, not consciously to imitate her, but because it comforted me, when the club canceled our booking. 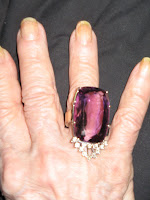 The nibble on the "Ribet Affair" (title changed to "46th Street Binge"), inspired me to buy an 80 carat Amethyst brooch, and get a jeweler to transform it into a knuckle-high ring. 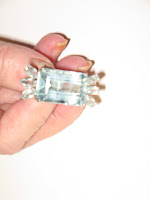 Offers to produce my play? Got myself a 40 carat, Aquamarine in a horizontal setting that fits across two fingers. Other plays -- big golden Sapphire for my pointing finger; a dainty, costly, cluster of opals interspersed with diamonds, for my pinkie.

What the hell was I thinking? Well, I guess you know what I was thinking ... I was rewarding me, and wearing my rewards that I now keep in 5 white socks in my sock drawer. Can't wear them. Too flashy. Mugger encouraging. Wrong style for who I am.

One day, in a down mood, I stuffed my socks in a shoulder bag and ventured into the forties, between Sixth Avenue and Fifth Avenue, where pawn shops, jewelry shops, stores filled with diamonds, silver and gold rings, watches, bracelets, necklaces -- stores with WE BUY & SELL signs in the windows.

In jeans, floppy T-shirt, sneakers, I went from store to store, from counter to counter, planning what to say, what to do, which one of those unfriendly faces should I approach, to ask how much the do0dads in the socks were worth?

If I'd taken out a sock, would I have been arrested?

I never took them out. 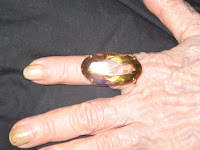 The 5 socks are in my sock drawer. Maybe someday I'll find someone who needs to be rewarded... meanwhile, I donned this one ...

Oh my, I love wearing this golden sapphire -- I'm pointing it to myself, telling myself it's not too flashy, it's the sun on my finger.
Posted by em's talkery at 6:24 AM

Email ThisBlogThis!Share to TwitterShare to FacebookShare to Pinterest
Labels: favorite things, private self

I remember my boyfriend Tim Wright researching those headlines the summer of 1965.

Each ring is a fascinating chapter in the story of your life Dear Em, thanks for sharing (and the golden sapphire is my favourite!).

What a wonderful story!!!! I too have jewelry that no longer fits my current life style... I keep planning on taking them to be sold..and some how...I never do... I wish mine came with stories of Richard Burton though....LOL