ALONE IN A CROWD 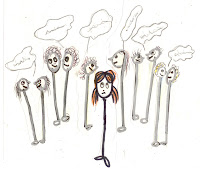 When I was in school, I never quite fit in, though I tried to.

The first time I went to a Saturday night dance, nobody asked me to dance except Lennie, who was a "drip."

The one college orientation get-together I attended was grim. The other girls and guys seemed like a collection of drips from all over the world.

I went to a couple of parties and pretended to enjoy myself, but Christmas Eve was awful, and New Year's Eve was seriously depressing. (On New Year's Day I took a train to New York and never went back to college except as a performer on the college concert circuit.)

In the city, there were lots of people to have quick conversations with, but they were too busy and I was too busy for get-togethers.

I got my first dance job, then a husband, and we got our Dance Drama Duo going. Socializing with other dancers, actors, fellow artists was okay -- part of "making it."

At cocktail parties I never did feel like I belonged.

After a show when people came backstage, it was exhausting -- a performance after the performance.

My very first creative effort was a solo done to the sound effects of bells pealing, a crowd celebrating. I stood upstage in the center, and walked very slowly, skillfully, smoothly downstage, forward to the edge of the stage, while slowly raising and reaching my arms -- reaching out to the people -- trying to join with the crowd that was celebrating in the world beyond the stage.

It's a simple sol0 (I've seen it on film). There's no dance movement. But the vision of one person in a crowd, not being able to become part of the crowd is touching.

Aloneness ... each of us is one person, a solitary, lone figure ... loneness isn't loneliness unless it makes you sad. It doesn't make me sad anymore.
Posted by em's talkery at 4:43 AM

I remember when I was a little girl, they brought me backstage to see you in the intermission of one of your big performances. I could tell that it was a bad time to visit - you had to be ready for the next part of the performance. Since then I have always hated to visit people backstage. There are other and better times to visit people you know who are in performances