WHY I'M MENDING A SNEAKER 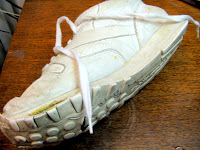 After I achieved my driver's license (BIG ACHIEVEMENT to get through the lines, the scolding attitude of the officials), I rewarded myself -- bought two pairs of new sneakers.

They're beautiful, pristine -- I emailed the "Laces for Less" guy, who carries shorter laces (36 inch), and the laces arrived today.

I'm ready to break in the white pair but ...

But gee, my old, worn-out, grungy white's are soooo comfortable, so friendly, so easy to don ... and it's raining ... if I rush outside to pick up the mail the mud won't hurt them.

The truth is, I'm attached to my old grungy white' s. We've been together since when? 2002 -- seven years? And last year when I started repairing them after I noticed the sole of the sneaker was separating from the side of the shoe ...

Well, I've successfully patched my leather ballet slippers with Westwood Contact Cement, so why not try a little on my sneaker sole?

The Westwood worked for a month. Then it needed re-gluing. JC did it expertly, It lasted another month. So, I did it -- did it in a hurry, maybe not as thoroughly and carefully as JC did -- two weeks later had to do it again, and then again a week or so later, and now ... re-gluing lasts for a day or two. (The two vise tools JC bought me, so that I can press the fresh glued rubber tight against the shoe itself, are a big help.)

Got the picture? It's not penuriousness. I'm not really a cheapskate. It's the practical Em's work ethic -- if you can fix it, fix it!

Yes, this is a post about something utterly important except ... alas, it's a sad sort of trend I've noticed in "elders" -- parents, lonely aunts and uncles, and retired friends ...

I'm a parent, and an Aunt, but I not lonely and definitely not retired, so why am I preserving a worn-out, well-used, once-upon-a-time useful possession?

Maybe that's affecting me, but the truth of the matter is ... well, it's because I'm growing older, because my feet, my knees and back are ...well, they're not as limber or fast-healing as they used to be ... and well, they're wearing down (not wearing out yet) and I'm hanging on to my youthful vigor, (and youthful looks), and fast mind, and any and every aspect of me that's functioning well and hanging on!

I don't want me, once-upon-a-time a very peppy, creative person, to fade, to weaken, to lose an iota of what I am, and make what I am into what I was!

So I'm mending my sneaker again. Gluing it. sticking it into the vise, tightening the vise as tightly as I can. If that doesn't work I'll ask JC to do it in his accurate, neat, carefully thorough way, and watch like a hawk..

Dear Emily we are currently sitting in our ballet pedagogy class at oklahoma city university. As a class we have all read your amazing biography TWICE! and are completely inspired and amazed by your story. We definately want to meet you as we have been trying to find you for the past 3 years. We are overwhelmed with joy that Mary Price Boday was able to speak with you via email. we are just so excited and can't wait to read your new work! Today is a special day because of you!

The soles of my sneakers wear down long before I get to the point where they need mending. So I have to keep buying new ones about once a year, or else do damage to myself by walking on worn out sneakers. I can only wear Sauconys. I do develop favorite pairs, and I HATE to give up on them, hate to have to move on to a new pair