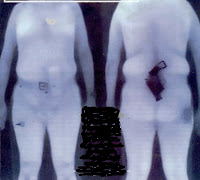 This is how you may look in the Secure 1000 Personal Scanner. 150 of them have been ordered by the Transportation Security Administration (TSA).

C'mon now -- be truthful, are you really shocked, perturbed, absolutely against it?

Anyone who travels by plane knows it is hell to be on a plane and wonder -- quietly, privately in some corner of your mind – is there someone on this plane with a bomb? Even thinking about it just for a second is awful!

Okay -- IF you're out of shape -- who cares? Who knows? Once you've left the screening cubicle, no one knows it's you except a screener -- an employee sees a few-hundred bodies like yours every day.

Surely you know that your friends, no matter how nice they are, have noticed where you're bulging -- friends notice -- they just don't say anything! As for inbred modesty -- it's out of date! We've all been seeing females on television, in movies, in magazines -- with overflowing cleavage -- not just a peek, major revelations about breasts, belly-buttons, and buttocks. And men; in jockey shorts or trunks, with their private parts, every curve and bulge revealed.

Republican Congressman, Utah's Jason Chaffetz, who has vowed to stop gay marriage in D.C., is sponsoring a measure that would prohibit the use of full body imaging for primary screening at airports. He's said -- "As a society we are going to have to figure out the balance between personal privacy and the need to secure an aircraft. And there is no easy answer."

There is an easy answer -- if the pictures can be taken, stop complaining. Just do it.

Metal detectors, which have been around since 1970, can find knives, guns and grenades. They would not have detected the explosives on Christmas Day, in Urgar Farouk Abdulmutallab's underwear.

According to various sources, including the Transportation Security Administration (TSA), the Millimeter Wave Scanner (we have 40 in 19 airports) might have detected Urgar's explosives, but might not. There are plans to increase the number of them to 900 by 2014. But ... let's deal now, with NOW!

The Secure 1000 Personal Scanner, also called the Backscatter X-ray, will probably have the scanner (the person who's looking at you), in a room other than the room with the actual machine, and that provides you, the passenger, with a modicum of privacy. Though explosives hidden in body cavities might not have been detected without further screening, this scanner would have detected the explosives in the man's underwear. And that's why the TSA wants more of them.

What's the solution? Awareness; interaction, and communication that the President has demanded. Put away false modesty. And if you have children, teach them what you and I need to learn.
Posted by em's talkery at 4:43 AM