It's sort of like onion rings, whipped cream, or a Big Mac. A kid, having a taste, will think "Yummy, I want more." And if it's super delicious, he can't help wanting more, and more, and more.

So nowadays, we're paying a lot of attention to fatsos, making them overly aware of cholesterol, trans-fats, eating less, losing weight, and the life and death importance of eating right foods, keeping away from the wrong foods.

It's progress -- we've known for years that over-eating is bad -- we should have done something about this earlier.

Life and death important is what we should have done earlier, and need to do about VIOLENCE -- the thrill, the challenge, the fun and joy, the ecstasy of playing and winning and immersing one's self in the world of a video game.

California is up in arms about children killing zombies, prostitutes, pimps and terrorists, about pushing buttons and enjoying killing, maiming, dismembering humans, especially if they're evil, bad guys, whose private parts deserve to be exploded, destroyed.

Hurray for LA lawyers, finally, for the first time, convincing the Supreme Court to look at the $20 billion video-game industry, But will the Supreme Court pass a law? And if the court does, won't the Anti-Everything-New guys fight it, and incapacitate it? 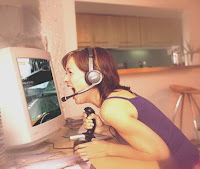 Still it's progress -- 80% of the California video game stores are voluntarily refusing to sell the worst games to minors (though the game manufacturers continue to claim there is no provable connection between game playing and "aggressive behavior" in real life).

Meanwhile, the stores that won't sell to minors, are selling to adults who play the games, with their kids watching over their shoulders.

And the more illegal it gets, the more the "worst" games -- the gruesome, degenerate ones -- are attracting kids and adults, inspiring film makers to provide even more shocking sex-murder-death scenes that draw larger audiences.

Can we stop it?

We are not stopping it -- we don't have the legislation to stop the sale of guns, games, or illegal substances. Except, maybe in California, where there have always been liberated, free-thinking voters who raise money, get thousands of signatures on petitions -- and get ballot measures passed to protect children, and the environment. So ... well ... maybe if we pay attention ...

I am paying attention! Every person who pays attention is one more, and one more breeds more, and perhaps we'll develop an attention-paying addiction and VIOLENCE will be an issue like cigarettes...

If you want to live, sooner or later you stop smoking. If we want to survive we have to find a way -- we have to stop violence.
Posted by em's talkery at 4:19 AM

About 7 years ago, Washington State passed a law banning sale to minors of video-games that involve killing police (they made the law very narrow on purpose to avoid trouble in the courts). Unfortunately, the Federal District Court overthrew the law because it violated the First Amendment. Evidently it is extremely hard to make these laws. I am glad California has had some success.

We tend to get tunnel vision about causes that may or may not be of the highest priority on the social scale, and as a father (and while not referring to myself by the label of "pacifist" I am indeed a peaceful sort of guy), I agree that we need to make both responsibility to maintaining ourselves (through health issues) as well as maintaining adherence to the Social Contract (saying "please" and "thank you" and not killing whores and zombies) values of great interest to each of us.