I remember the day Bill Clinton hugged her, after the press conference. 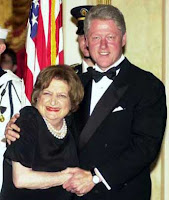 She always sat in the front row. I thought, gee, she's kind of witch-like, decrepit looking. Bill's a nice guy, hugging her like that ...

What happened to Helen Thomas? She has knowledge, experience, and know-how as a commentator and reporter. Was what she said about the Jews -- they ought to go back to where they came from and leave the Palestinians alone -- a horrific mistake?

What she muttered can maybe be ... well ... sort of explained away. Wasn't she expressing what I feel? I'm deeply concerned with what Israel is doing to families who have spent their lives living in Gaza.

I've been to Israel. Actually I met Ben Gurion and dined with him. It was the only country that I ever felt that it was OK for me to be a Jew, not religiously, but because of my father's heritage (which he totally rejected).

Performing for the Habimah (the famed company of Israeli actors) who loved me as if I were one of them, dancing in various Kibutzes (collective farms), what I felt, about being a Jew in a Jewish homeland, was a revelation. I was revered as an artist, beloved for who and what I am.

(In America, my value as an artist was measured but how much I was paid per performance; growing up in Illinois, and Pennsylvania, schoolmates attacked me, yelling "You killed Christ," and called me a dirty Jew.)

So Helen Thomas saying that Israel should "get the hell out of Palestine" and that Jews in Israeli should return to Germany, Poland, or the US. was a shock. It wasn't just an ugly comment about Israel. It was about Jews.

Thomas is 89. She's educated, and knowledgeable. What she said is reprehensible. She knew it. She immediately retired from her job and said, "I deeply regret my comments I made last week regarding the Israelis and the Palestinians. They do not reflect my heart-felt belief that peace will come to the Middle East only when all parties recognize the need for mutual respect and tolerance. May that day come soon."

She's nearing the end of her life. Her face is very unattractive. Her body is distorted by age

and osteoporosis. I feel sad -- that she was an important working woman -- a beacon for many many people who don't want to retire, who want to keep working as long as possible.

I think, without work she will be intolerably alone. She will feel useless. Work kept her alive and vigorous, and gave her a reason for being.

Though what she said was unacceptable and painful to me personally, I will miss her, the old guard, sitting in or near the front row, listening, absorbing, keeping in tune with the times.

I would feel okay if she continued attending the press conferences, and with conversations with her cohorts, she'd have a chance to undo, back away from what she said. I think she'd realize that her comment expressed an limited, ugly, compartmentalized mindset, and conversations with her peers will help her open her mind and change.

Helen Thomas has an active mind and I feel it would be better for all of us, if she held on to her seat, her place in the press corps.
Posted by em's talkery at 4:11 AM

I think she let loose with something that was deep in her mind, but that she ordinarily would NEVER consider letting out (just like some people still have deep racist feelings, but are careful to quell those feelings in both their behavior and their speech - Obama talked about that in his Reverend Wright speech). Anyway, it's possible that she has had a couple of those teeny, teeny mini-strokes, and that caused her to lose some of her natural inhibitions--I have known two people very well to whom that happened.

It's certainly possible that a mini-stroke could have short-circuited her self-censorship, but I know for myself that sometimes you see less and less of a need for censorship as you age. You drop the "polite bull****" and tell the truth.