I am focused on this guy. I don't want to be. I'm annoyed, pissed off by the fact that I'm hooked on his story again ... 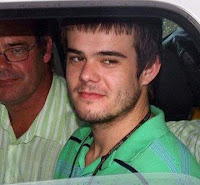 The murder of Stephany Flores, a Peruvian girl -- the way he did it -- what he's confessed says Joran is a sociopath, a remorseless killer ...

I wonder if his lawyer can finagle something. A tenacious, determined lawyer looks for loopholes and often finds them. If the lawyer gets Joran back to Mom in Aruba -- there we go again, with Aruban courts fiddling around, rehashing what happened five years ago.

I don't want to hear all the details again, about the 17-year-old girl with the two "ees" on the name her doting mother gave her. I don't want to see, again, Natalee's attractive, oval face, eyes-outlined, not flatteringly, blonded hair, her dancing adequately in an chorus line with other classmates similarly celebrating that they were almost, but not quite grown-up, sexy girls.

Natalee was not, in my opinion, exceptionally pretty, talented, or a girl with an especially important future, but she was a beloved, nurtured daughter with her mother's dreams bubbling around her. I felt her mother's pain. All the sentences I've read about the child dying before the parent bring back my mom, screaming, unable to stop screaming when the phone call came and told her my brother's body had been found in the cold water, next to an overturned canoe.

Aside from morbid curiosity about the murder -- I wonder if he's spoken to his mother, how she's taking it -- her husband had a heart attack and died earlier this year.

And Natalee's Mother -- she looks better than she did a few years ago --younger, botoxed maybe -- I still feel her pain; and sense a twisted bitterness in her.

Okay, Joran grabbed us again. We're gobbling up whatever the media serves, swallowing expert opinions about a psychopath -- we want him to suffer, be punished, pay for the endless days he had us feeling sorry for the Holloways.

Chewing on the news, digesting what little there is to digest -- oh good, I'm thinking, noting Joran's less handsome looks -- frown lines, anger, insolence on his face. I think he's haunted by what happened five years ago. He needed to punish the Peruvian girl for trivializing him. Punching, slamming, choking the girl, he was blaming all the other women in his life for what he doesn't have, and throwing away -- trivializing -- his own life.

He trivialized what his parents gave him. Those tender hugs and encouragement Mom gave him -- the help, succor, the money Dad gave him -- he thinks Mom and Dad screwed up --it's their fault that he isn't the dreamboat, leading-man hero they wanted him to be.

He doesn't care about the dead girls. He was punishing them as well as his parents.

I'm aware that focusing on Joran is easier, better than thinking about guys dying in Afghanistan, Iran's nuclear weapons, North Korea, Israel, Gaza... I'd rather think about Van der Sloot being raped, beaten up in jail, given a life sentence, than keep thinking, feeling hopeless, wondering how we are going to recover -- .at least in my life time -- from the oil.
Posted by em's talkery at 4:03 AM