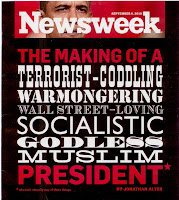 I was stunned when I saw this on the cover of Newsweek!

After I opened the magazine, I saw that it was a well-written, supportive article by Jonathan Alter. I looked at the cover again, I saw in very tiny print under the word president -- "who isn't any of these things."

That awful moment is gone but those words on the magazine's cover -- I keep hearing them on TV, seeing them in magazines and newspapers.

Every time I hear variations on those themes -- war-monger/Muslim/socialist/ etc. -- I find myself screaming oh my God, not another attack -- leave him alone, support him, who cares what you think, shut up!!!

The wrongness, the stupidity of those words paralyzes, infuriates me.

The counterattacking words on the tip of my tongue -- dammit -- the people who loved and voted for Obama, won't hear -- the media moguls won't hear nor will their experts. No, the opinionated experts (guys who crave attention), won't hear, don't hear because they've got a toe in the door of "now" and now is the time for them to become a name.

We, who voted for Obama, don't use newspapers for wrapping fish -- we've got plastic bags. We can email, vomit out tweets, vote yes/no/maybe in polls, sign petitions, text, chat online, or zip up our mouths, and just nod, shrug, and change the subject.

Oh please, c'mon -- why can't you voters hold onto what you felt, believed and already know about the man we elected? Why can't you continue to sense from his words, the look in his eyes, what he expresses about his wife, his daughters, their vacations, the games he plays, the clothes he wears, the look of him hurrying to a meeting in the morning, the look of him when he's relaxing -- (all those personal things that you check out before you fall in love, or decide NOT to) -- why oh why can't you hold on to what you feel?

Trust yourself, you know who Barack Obama is.

He's a good man, a born leader -- he knows what's going on. He's trying to fix what needs to be fixed in America and the rest of world.
Posted by em's talkery at 4:05 AM

It's all very interesting to me. I am not one to argue politically; I insist if I talk politics that it's a discussion not a debate. I want to understand other sides of issues to better inform my own. Lofty, perhaps, but I want to be fair.

Obama's presidency has sparked more debates with my conservative parents than ever before. I don't understand the criticisms - or the unbelievable conspiracy theories. If Obama even was a Muslim, so what? It's his choice and this is America, where we're supposed to accept such choices.

I do not envy him his job and I wish him well. After all is said and done I think he's going to do his best to help Americans.

I personally voted for President Obama, although when I saw him campaigning in Jan. 2008 (when I first paid attention to the candidates), I didn't like him. I was jaded by all the candidates running for any office. For me, it was 6 of one, half-dozen of the other. Something changed my opinion over that Summer. I really listened when he was officially in the running. I liked what he had to say, I liked his choices for his cabinet, I saw the direction he was going and could only hope he'd follow through. So far, he has. I am a Democrat, but I don't vote for one just because the candidate is one. I have to believe in their platforms and I did with Obama. He hasn't let me down yet. I can't wait to see what Wall Street looks like when he cleans that up. He seems to listen to what the people want. The problem with the naysayers is they want immediate results and they want to hear what they want to hear, not necessarily what the law says (hence the terrorist coddling remark). Wise voters understand it took time to create the mess we're in, it's going to take time to build up again. Some financial areas he has to tear down and recreate because of the corruption. I see him trying to 'take the bull by the horns' and have the American people take responsibility for our debt, while helping us pay it off.
My biggest fear for him is that his fate will mirror John and Robert Kennedy, Abe Lincoln, and Martin Luther King.
Overall, the world is being restructured, financially and geologically. President Obama is part of that change.

I'm with you Emily, but you know there's a lot of people who are angry that he got elected, and unfortunately hate can be very strong. He's upset quite more than a few apple carts, and the power elite don't want any change that threatens them. I'm not known for being brutally realistic, but it does sadden me that my prayer after the election was called in his favour was not one of pure rejoicing, but was mixed with prayer for protection for him and his family.